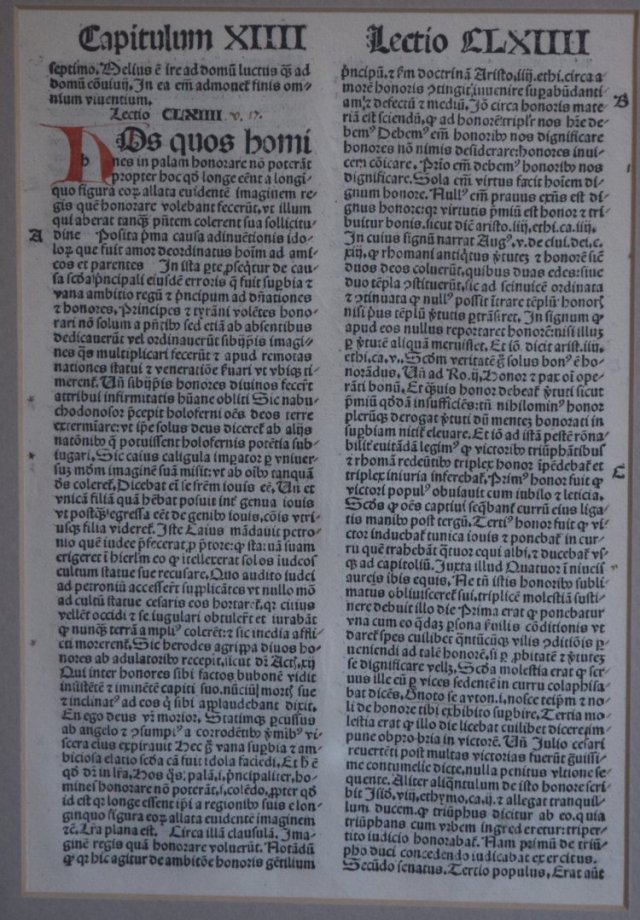 A bit of an oddity for this blog, but as this is framed and on the wall by my desk it seemed wrong not to discuss this piece of history. I only have one page, a complete book would be well beyond my means so this is my only example of an incunable; that is a book printed up to the year 1500. The Latin term incunabula is translatable as cradle so is appropriate to relate to works from the birth of printing. Johannes Gutenberg, inventor of the printing press, started in 1450 in Mainz, Germany, and in 1452 he completed work on his most famous production, what is now known the world over as the Gutenberg Bible. Nowadays we think of printing as mass production, and in a way for its time this was the case however just 180 copies of the bible were printed by Gutenberg so each book printed in this period would only have had tiny numbers produced. This is printing but not as we know it.

In Britain printing didn’t arrive until William Caxton set up his printing press in 1476 at Westminster, initially intending to print his own translations of books. He had started printing in Bruges, Belgium having learnt how to do it in Cologne, but came back to England in order to meet demand for his books. His first title ultimately became his most famous however and he will be forever associated with Chaucer’s Canterbury Tales.

According to the Incunabula Short Title Catalogue; maintained by the British Library; in the first 50 years of printing just under thirty thousand different editions of various titles were printed in 18 different countries in a total of 282 printing towns. The ISTC as it is known is an attempt to catalogue every known incunabula, it is almost complete and makes a fantastic reference database for this period. My page is from Super sapientiam Salomonis, a commentary on the books of the Wisdom of Solomon by Robertus Holkot. It was printed by Heinrich Gran in 1494 in the town of Hagenau, which was in Germany then but is now part of France. According to the ISTC there are 104 copies of the book held in institutions around the world, one of which has been scanned and made available on the internet. My page can therefore be seen here in the copy of the complete work held in Munich via the MDZ (Das Münchener DigitalisierungsZentrum) an archive started in 1997 and which provides an unrivalled collection especially of early works in a digital form. 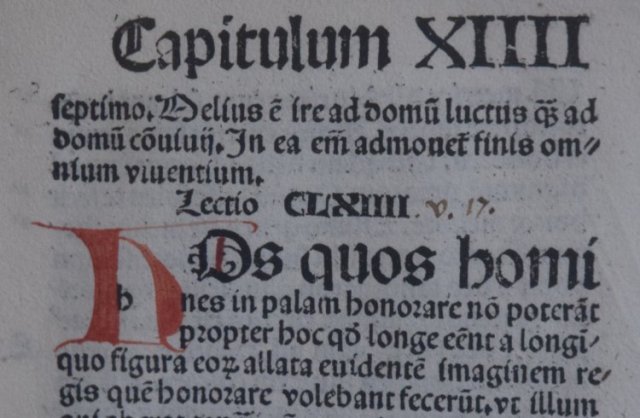 One immediate difference can be seen between my page and the digital copy and that is in the red letter h in the top left. This is because this page has been rubricated, that is the red letter has been hand written by a scribe who would have been employed specifically to add red letters to printed texts as indeed they would have done to handwritten manuscripts before the introduction of the printing press. These specialists were responsible for the beautiful initial lettering in medieval texts and their skill lasted for several decades after printing took over, hand embellishing the basic printed works which could only be in a single colour and it does mean that every copy is different. Rubrication is from the Latin rubico which means ‘to colour red’ and the red letter used to indicate something special gave us the phrase ‘a red letter day’ which is a date of particular importance as these days would be marked on the ecclesiastical calendar in red rather the usual black.

I bought my page from a small shop in the world’s first book town, Hay On Wye, roughly 20 years ago. Back then there was a shop that specialised in ancient bibles and other old books and they just had a few loose pages from different incunabula for sale. Sadly the shop no longer exists but I’m very pleased I bought this as an example of printing history, it is after all 524 years old and one of the oldest man made objects I possess. The paper isn’t actually as grey as it appears in the photographs. The page is framed and behind glass so I couldn’t use flash because all I would have got would be glare off the glass. The true colour is much closer to the digital image from Munich.