Much better known for his work Metamorphosis, Ovid also produced this treatise on the technique for finding and importantly keeping the love of your life. That it also includes hints for hiding infidelity and some of the advice is a little too true to life for some of its readers two thousand years ago probably didn’t help when he fell out of favour with the Emperor and was exiled from Rome for the final sixteen years of his life. 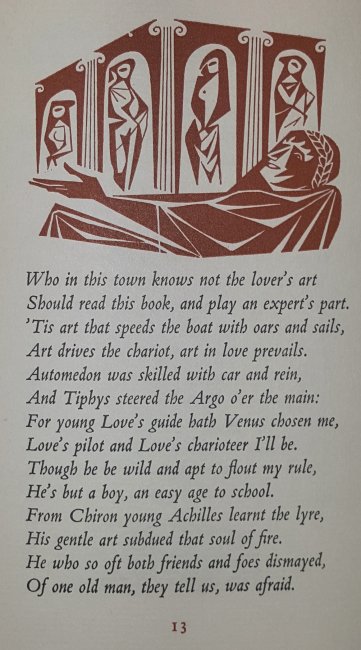 As the lovely Folio Society edition that I have is quarter bound in leather with a plain brown cover I have chosen not show the outside as it is rather dull but instead to have three extracts with the drawings by Victor Reinganum which decorate most of the pages, including the opening shown above where Ovid sets out what he hopes to achieve. The book was published in 1965 and uses the translation by B.P. Moore originally published by Blackie & Son Ltd. The font used is Poliphilus 13 point and I think suits the text admirably well. Unusually for Folio the book was reprinted just two years later which attests to its popularity.

The work consists of three short books, the first two are aimed at men trying to find a partner and get her interest (book 1) and then Ovid looks at how to keep her (book 2). The third book was written slightly later and is aimed at women looking for a man. Despite being over two thousand years old much of the advice given by Ovid is as good today as it was in Roman times. The first, and most obvious, but still got wrong many times, is that if you want to meet a woman then it is best to go to where they are, don’t hang around in places with your male friends, go to the parks or theatres. But remember you are not there just to watch the play. 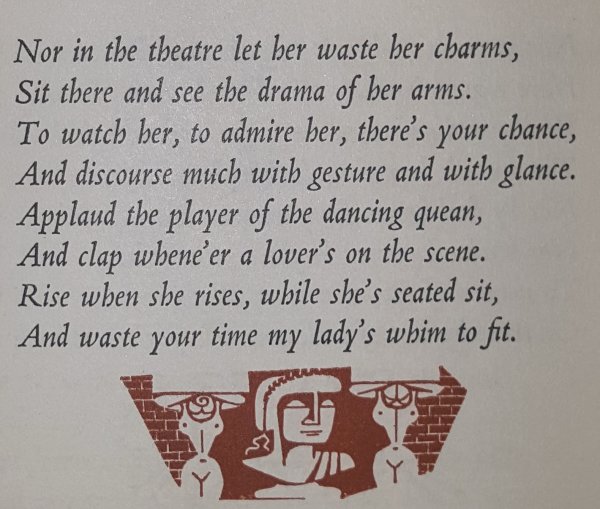 When you have found ‘the one’ then how to make sure she knows you are not only interested but are looking for more than just a friend is covered next, and then once a relationship has started make sure that she knows that she is the only one for you. 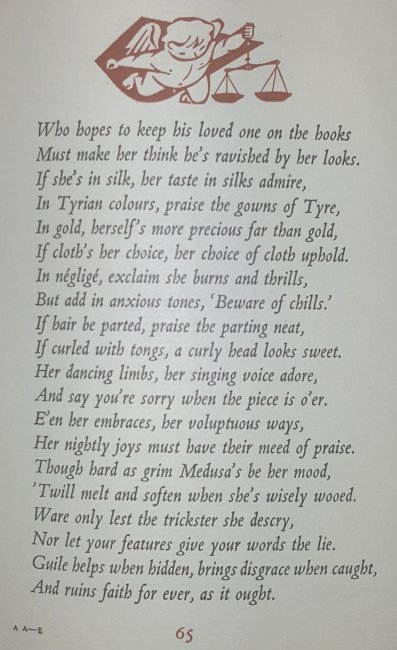 The third book, for women hoping to secure a man, repeats the suggestion from the first book to go where they are although it point out that the sensible men that are also looking for women (and have read the earlier treatise) will be where she already is, so maybe start at the theatre. However there is also beauty advice, such as for make-up (basically don’t overdo it, use enough to enhance not redefine) and hair (pick a style that suits your face shape). The words about makeup are particularly poignant when you consider the very basic types available at the time which would degrade quite quickly in the Italian sun. I love the suggestion in the passage shown below that the morning beauty routine is best done away from the gaze of the man the lady is hoping to attract, after all why should he know what she has done to enhance her beauty. 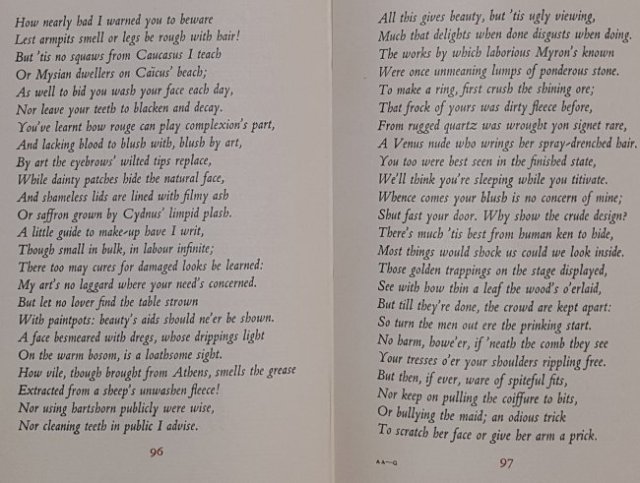 I don’t want to give the impression that Ovid is just covering beauty tips, there is much the same sort of advice given to the ladies as to the men in how to attract a mate and even what to do when you have got him. How to arrange messages between you when things are still not publicly known and you don’t want anyone else to know. This also applies to illicit trysts when secrecy is vital and he is not shy of making this clear in his text.

Overall the book(s) are a fun read and in places could be lifted straight into the advice columns of today. It’s a fascinating glimpse into an ancient past that perhaps is not that ancient after all.

A note on the translation used is probably useful here at the end of the review. Clearly Moore updated some parts, there are two references to cars for instance when leaving the vehicles as period would have been far less jarring. There are other lines where I felt the intrusion of the modern was out of place and disturbed the flow of the text. Having said that the translation is very readable apart from these examples and the deliberate attempt to keep notes to an absolute minimum (just two pages at the back which mainly name the character referred to when a reader in 2AD would have simply known who it was) makes it more a reading pleasure rather than an academic exercise. There is a translation available at Project Gutenberg which dates from 1885 but this is in prose rather than the verse employed by Moore and is a lot less fun to read so overall I’m glad I have this edition.