A certain critic – for such men, I regret to say, do exist – made the nasty remark about my last novel that it contained ‘all the old Wodehouse characters under different names’. He has probably by now been eaten by bears, like the children who made mock of the prophet Elisha: but if he still survives he will not be able to make a similar charge against Summer Lightning. With my superior intelligence, I have outgeneralled the man this time by putting in all the old Wodehouse characters under the same names. Pretty silly it will make him feel, I rather fancy.

The opening paragraph of the preface by Wodehouse to Summer Lightning is typical of the humour of the man and is a perfect example of why I love his works. I don’t care that you can often recognise bits of previous characters in some new ones. Frankly the world of which he writes of stately homes in the country and clubs in London all populated by the most bizarre yet oddly believable characters is what I’m looking for when I pick up one of his books. Of invariably rich and often foolish young men, sensible young women, wildly eccentric uncles and terrifying aunts is the Wodehouse world made and the occasional sensible male character such as Jeeves, the gentleman’s gentleman in the Wooster stories or Beach the butler at Blandings merely highlight the craziness going on around them by being a beacon of solidity. They are an escape from reality to a time and place that probably only ever existed in Wodehouse’s fertile brain but which is instantly recognisable as 1920’s England and could be nowhere else. 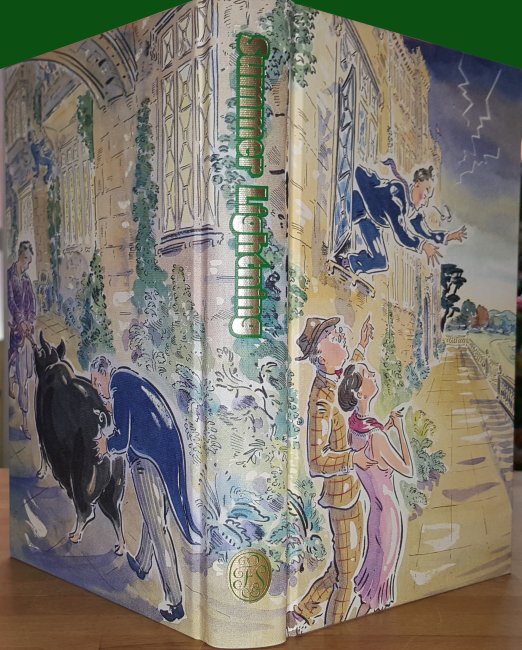 Summer Lightning is part of the series of books and short stories that relate to the goings on at Blandings Castle and was originally published in 1929. For those people who only know Wodehouse through the ever popular Jeeves and Wooster stories we are introduced to a whole new collection of odd characters and yet more bizarre plots in this series of books. Summer Lightning is not the first in the series but it is a perfectly good place to begin as you are introduced to the population of the castle very well and don’t need the earlier volumes to know the dynamic between them. Head of the family and, theoretically at least, in charge of the castle is Lord Emsworth who would be quite happy if left alone with his library, the castle grounds and of course the love of his life, his prize pig The Empress. In reality the castle is run by his sister Lady Constance who as châtelaine makes certain that things actually get done, as long as they are what she wants doing. The two do not exactly get on and Lord Emsworth usually gets bullied into at least starting some of the things his sister plans although usually by his absent-mindedness they rarely end up as she intended. The other constant inhabitant of the castle is the butler Beach who invariably gets caught up in the shenanigans of the various family members and guests there.

As the novel starts there are three other significant people in residence, one of Lord Emsworth’s nieces Millicent Threepwood, his newly appointed secretary Hugo Carmody (who is secretly engaged to Millicent) and his brother Galahad Threepwood who is writing his scandalous (and possibly slanderous) memoirs. You can already see two plot lines that will be developed. Later on add in Ronald Fish who is one of Lord Emsworth’s nephews, a friend of Hugo Carmody who he ran a failed nightclub with and whom Lady Constance hopes will marry his cousin Millicent, along with Sue Brown, a chorus girl in a London theatre, who is engaged to Ronald but would definitely be regarded as unsuitable by the family and things really start to get mixed up. Throw in pig-napping, mistaken identity, rivalry with the neighbour Sir Gregory Parsloe-Parsloe, more pig-napping and a detective brought in who is also in love with Sue Brown although she dislikes him and it becomes quite complicated. Having said that Wodehouse is a master of this and you can always follow the various machinations of the characters as each tries to get to their desired outcome with greater or lesser success.

Beautifully illustrated by Paul Cox this 2004 edition of Summer Lightning is published by The Folio Society and as well as this stand alone volume it is available as part of a boxed set of six books which between them make up roughly half of Wodehouse’s output about Blandings Castle and it’s inhabitants. I now live within four or five miles of where the Blandings books are set in north Shropshire. Precisely which place gave Wodehouse his inspiration is not known but journey times and the fact that The Wrekin can be seen from the castle means that it has to be round here, local newspapers mentioned in the books although fictional also refer to local towns. The most likely house that the prototype for Blandings is Apley Hall and the sheer scale of this property fits in well with the descriptions of the castle in the books. This local link is what has encouraged me to re-read the books set round here and this had led to me exploring more of his works since moving to the area. He wrote over 70 novels and well over 200 short stories so is remarkably prolific and is possibly even more popular now than he was in his lifetime with a 1000 strong membership of the P G Wodehouse Society and deservedly so. His books are great fun, now which one shall I read next?