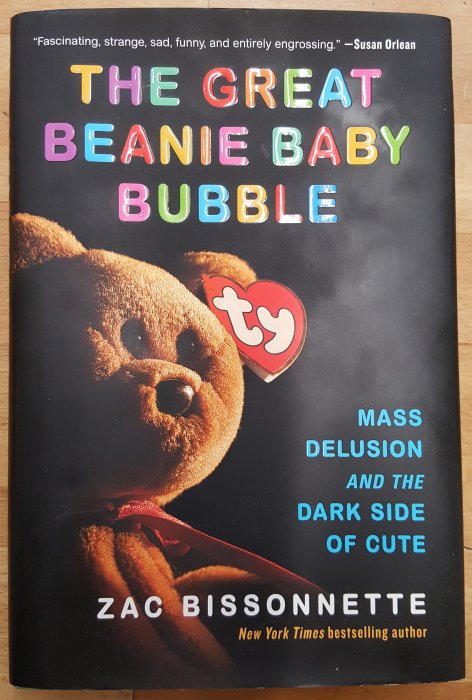 The subtitle on the cover of this 2015 Penguin hardback first edition is no longer featured on the current paperback edition as can be seen below. The change of illustration to a bald eagle toy shot with an arrow is, if anything, more disturbing than the staring bear on the original cover.  I miss the line about mass delusion though as it really sums up the book in just eight words.

Although I now own one of the largest specialist teddy bear shops in the UK I first discovered the world of collectable bears right at the end of the Beanie craze and never started collecting them, as I was far more interested in the products of the Steiff company at the time. I do have a small number, but only of penguins, puffins and a pelican to sit on the shelves with the book series of the same names. This book therefore was an instant purchase when it came out, I knew some of the history but really wanted to know what and how it happened. How could a $5 toy sell for $10000 just a few short months after it was released? Talking to my staff members who had worked in the shop for many years before I took over and remembered the queues outside if word got round there was a delivery there was clearly something special, a self perpetuating dream that here was an investment for all as the initial outlay could be so small.

Bissonnette does a remarkable job in following the history from right at the beginning and tells the story of Ty Warner, a man who can genuinely be called a self made billionaire and who is still the sole owner of Ty Inc. and his rise from failed actor to a man worth in excess of $2.4 billion. Warner himself is notoriously difficult to approach and will not give interviews but Bissonnette has managed to talk to a wide range of people ranging from his estranged sister to ex-girlfriends along with people who worked at Ty Inc. and numerous significant collectors. What shines through is a ruthless perfectionist never happy with anything that he doesn’t personally totally approve. All the designs were by Ty and he would go through huge amounts of fabric, eyes, etc. to get the look he wanted. Checking the posture of a cuddly to get it sitting just right and rejecting anything that was not to his high standards. The reason why Beanie Babies took off initially was down to this attention to detail they really were very well made, especially for the price. 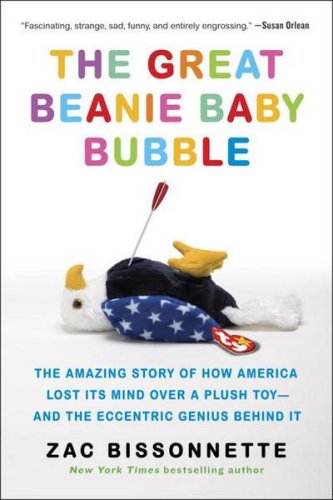 The problems began when collectors started to deal in a secondary market and convinced themselves that what they had was an ever appreciating asset. This has happened before, the most famous example being Tulip Mania in the Netherlands in the 1630’s. Individual bulbs would sell for more than the price of a house at the height of the bubble but the only thing holding them at that price was the bubble itself and when enough people realised this and stopped buying in March 1637 it suddenly collapsed. Much the same happened with Beanies, there was no real reason for the high prices, yes some were limited but there was still a lot of them around and Ty Inc. stoked the fever by creating artificial shortages to boost the price. Stock would be held back from one part of the world creating demand for what was seen as a rare item only for the blockage to be released and the market flooded. They did this several times and this contributed to the crash as people stopped believing in rarities so were not willing to pay the high prices.

A lot of people lost a significant amount of money, especially those who got caught up in the craze just before it all fell apart at the start of the year 2000, some people did make money from the early days and if they got out in time they did OK. The only person to make a lot of money was Ty Warner. He later would plead guilty to tax evasion and be fined $53 million but as he personally made over $1 billion from the business I doubt that bothered him particularly and as Bissonnette points out in the book the day after the judgement there were workmen painting the gates to his $150 million mansion gold.

This is a really good book, not just of interest to bear collectors but for anyone with an interest in boom and bust economics or just human psychology. The story of Ty Warner himself is fascinating and very well written in this account.