The first thing you notice when you pick up Hedda Gabler is that there is no character of that name in the cast list. Gabler was her maiden name but at the start of the play she is just returning from honeymoon having married Jörgen Tesman so she is referred to in the cast as Hedda Tesman. As Ibsen himself wrote:

The title of the play is Hedda Gabler. My intention in giving it this name was to indicate that Hedda as a personality is to be regarded rather as her father’s daughter than her husband’s wife. It was not really my intention to deal in this play with so called problems. What I principally wanted to do was to depict human beings, human emotions and human destinies upon a groundwork of certain social conditions and principles of the present day. 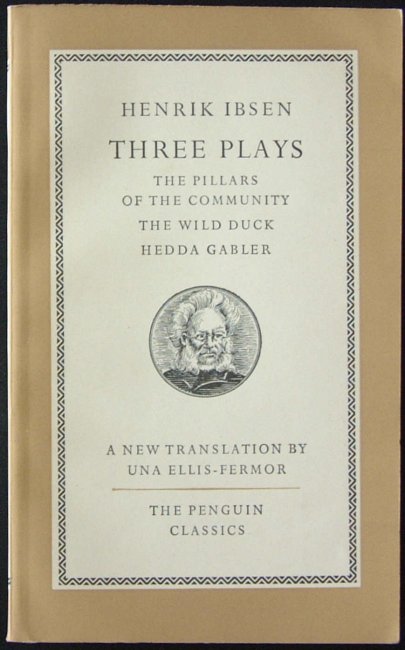 The edition I have read is the Penguin Classic translated by Una Ellis-Fermor printed in 1950, she also translated a further collection of Ibsen’s plays for Penguin in 1958 entitled The Master Builder and other plays. When Penguin came to reprint this 1950 book it was retitled Hedda Gabler and other plays to match the later edition. In both volumes Ellis-Fermor describes the translations as ‘readers versions’. By which she means that although the plays could be performed from her translation her intention was to produce works that a reader would find comfortable to read. One thing I have definitely discovered during this month of reading plays is that although when performed on the stage a play can be a wondrous thing and transport you to worlds of imagination; when you sit and read them they are somewhat less satisfying. They were never intended to be read as literature after all, however Ellis-Fermor has, whilst retaining the structure of a play, made it so it can easily be read as a novella (102 pages in this version).

The play is in four acts all of which take place in the Tesman’s new home which has been purchased and furnished whilst they were away on their six month honeymoon under the supervision of Jörgen’s aunt Juliane. She has even put some of her own money into the purchase when finances became tight. It is clear the Jörgen needs the professorship that is available in order to finance is new life as a married man especially as Hedda appears to have quite expensive tastes. For her part Hedda is already bored of the marriage, Jörgen appears to be more interested in his work and books than her and the ‘honeymoon’ was really an extended research trip. There is a funny passage of dialogue near the beginning of act one where Juliane has clearly planned the layout of the house with two empty rooms to be used as nurseries and children’s bedrooms and Jörgen really can’t understand and thinks they are for his library extension and no matter how she hints at Hedda being possibly pregnant Jörgen just doesn’t twig.

When Hedda does finally appear on stage she is deliberately rude to Juliane and makes it clear that she doesn’t like the way the place has been decorated, Juliane leaves and in her place Mrs Thea Elvsted arrives with news of Ejlert Lövborg, Jörgen’s presumed rival for the professorship especially as he has published a book whilst they have been away on honeymoon. It is at this point that the complex relationships between the characters start to be explained. Thea was in a brief relationship with Jörgen before he met Hedda and she had also been at school with Hedda where she had been bullied by her. Hedda, for reasons of her own makes out that they were school friends and gets Jörgen out of the way to talk about Ejlert who Thea had moved in with after leaving her husband. Thea tells Hedda that she is worried about Ejlert as he has gone back to his old ways (presumably drinking) and that he had been threatened by a previous partner with a gun and she thinks he may meet her again. Hedda reassures her that no woman would do such a thing but as Thea leaves she goes to a cabinet and pulls out her fathers pistols as the first act closes.

Act two begins with Hedda firing one of her guns towards Judge Brack as he comes to visit Jörgen who is out at the time, she is clearly not mentally stable but as the play continues her instability revolves around a desire to totally control somebody else and it seems she is set on it being Ejlert. Whilst waiting Brack makes it clear that he also desires a relationship with Hedda although she is not at all keen on the idea. Jörgen returns and is soon followed by Ejlert at his invitation, once they actually meet Ejlert explains that he doesn’t want the professorship as he has a new book he is working on. Whilst Jörgen and Brack are talking in another room Ejlert tries to renew his relationship with Hedda and she sees that he can be the one she can control. Thea arrives towards the end of the act and the two woman settle down for the evening after Hedda has persuaded Ejert to accompany Jörgen and Brack on their planned night out with him to return at 10pm to escort Thea home.

Act three is set the next morning, both ladies are in front of the now cooling fire, Ejlert obviously didn’t return to take Thea home but when Jörgen comes in he is carrying Ejlert’s manuscript of his new book and is very excited about how good it is. He had seen Ejlert drop it in the street and picked it up but hadn’t returned it as he was afraid he would lose it again. However Jörgen gets a message that his other aunt is dying so needs to leave urgently. Ejlert meanwhile is convinced he has destroyed the book and arrives to tell Thea who is horrified as she had worked tirelessly on the book with him and leaves almost immediately. Ejlert left with Hedda is even more under her spell than when they were a couple and she seeing this as her chance to prove that she can control somebody presses him to commit suicide and gives him one of her pistols before he leaves. Afterwards she burns the manuscript.

The final act is very short and takes place soon after the previous scene. It turns out that Ejlert had gone from the Tesman house to the home of another previous girlfriend and there had died from a gunshot wound to the chest, Hedda thinks he shot himself in the heart (a truly romantic gesture) but no Judge Brack explains to her that the gun appears to have gone off accidentally and that he recognised the pistol thus insuring his power over her. Thea also reveals that she has the original notes from their work together so Jörgen and her start work to reconstruct the lost masterpiece. Knowing that her plans have failed and instead she is the one controlled Hedda retires to the other room and shoots herself which is where the play ends.

Hedda through out the play is depicted as a materialistic, narcissistic character, thoroughly unlikeable but someone who has drawn the three men to her in their own way. Jörgen has a wife who will help him progress in Norwegian society. Brack sees someone he can control and therefore use as he wishes. Only Ejlert Lövborg really loves her but she doesn’t reciprocate this love and he is apparently blind to the love from Thea Elvsted which could have made them both so happy.

At the end of the play you hope that Thea and Jörgen can get together as a couple during their work in resurrecting the lost manuscript. Finding through their shared loss a rekindling of the love they had in the past. Surely something good can come out of the tragedies.