Last August I completed a reading challenge of all ten books in the first Penguin Books crime set from 1938. So this month I have decided to also attempt more than the expected four books by tackling the complete Sherlock Holmes stories by Sir Arthur Conan Doyle as published by The Folio Society. The set consists of five volumes of short stories issued in 1993 and four volumes of novels which came out the following year. The series has a very attractive binding of an offset wrap around design on each book which makes the spines also display the image and appropriately the books are printed using the Baskerville font. My copies are well read and the titles on the short stories are badly worn, although looking at other examples in various bookshops this does seem to be a common feature of this particular edition. 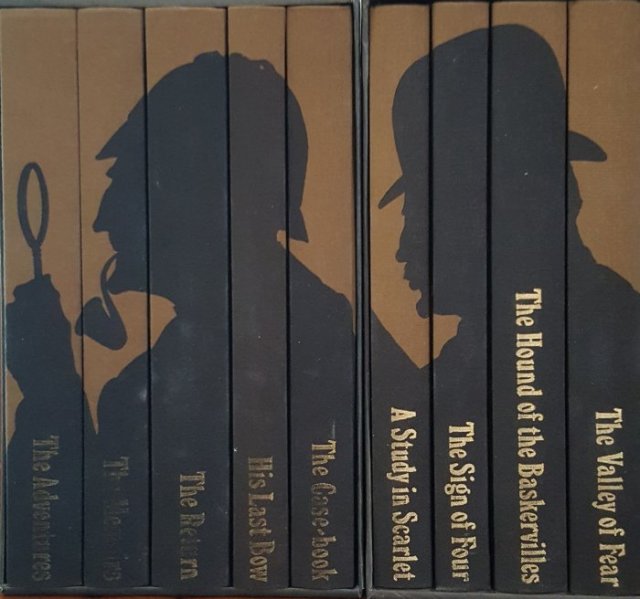 Now although this looks like a logical reading order in fact Doyle wrote the first two novels “A Study in Scarlet” and “The Sign of Four” before he produced any short stories so in fact a better reading sequence is those books this week, followed by the short stories then finally the last two novels. Although novel number three “The Hound of the Baskervilles” is set during the time of the first two collections of short stories it didn’t actually come out until much later and it doesn’t affect time lines too much to leave the last two novels until the end as they both are looking back on past cases. 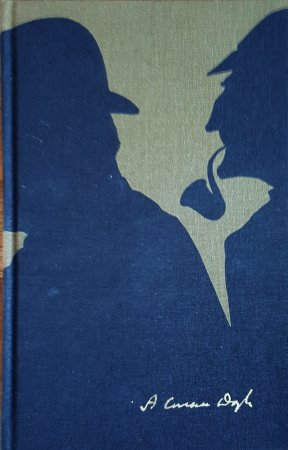 A Study in Scarlet

This is the first appearance of Holmes and Watson and originally appeared in print in the 1887 Beeton’s Christmas Annual before being published in book form in July 1888.

“How are you?” he said cordially, gripping my hand with a strength for which I should hardly have given him credit. “You have been in Afghanistan, I perceive.”

“How on earth did you know that?” I asked in astonishment.

“Never mind,” said he, chuckling to himself.

and so a partnership was born…

The book fairly rattles along, just ten pages in Holmes and Watson are ensconced in 221b Baker Street and Holmes has started his work much to the puzzlement of Watson. The two men are after all just sharing the property there is no indication that Watson would get involved in anything in fact he is specifically looking for a quiet life whilst recovering from his injuries from the war in Afghanistan. Watson however is intrigued as to what Holmes is up to and creates a list of attributes to try to work it out, these include him knowing nothing of literature, astronomy or philosophy, whilst other things such as botany (natural poisons anyway) or geology (soils and clays) were specialised in the extreme. Chemistry and sensational literature however he was a complete master of; none of these items seem to make any sense though.

Another few pages and Holmes again demonstrates his deductive reasoning and explains he is a consulting detective just as he gets a message from Sergeant Gregson of Scotland Yard asking him to come to Lauriston Gardens; Watson joins him and so starts his journals that the Holmes stories are supposedly taken from. The case, to Holmes anyway, is absurdly simple. In fact so simple that by the eightieth page he has apprehended the murderer with the help of his street urchin employees also known as The Baker Street Irregulars, and there is where the book starts to fall apart. For the next fifty two pages are back story. Doyle writes well with the dynamic of Holmes and Watson along with the bungling Gregson and Lestrade from Scotland Yard but over fifty pages without any of these characters whilst he ranges over the settlement of the Mormons in Salt Lake City and the inter-family rivalries just plods along especially after the pace of the first half of the book. It is not even written as though being told to our protagonists it is just an over long history.

We finally get back to Holmes, Watson, Gregson, Lestrade and their prisoner in 221b with just 22 pages left for Watson’s journal to wrap up and the murderer to explain how and why he did it. Very much a book of two halves but with enough promising material regarding the great detective to make a sequel inevitable.

The second time out for Holmes was in the February 1890 issue of Lippincott’s Monthly Magazine issued jointly in the UK and US, and by October of that year it had been published as a standalone book.

Sherlock Holmes took his bottle from the corner of the mantel-piece and his hypodermic syringe from its neat morocco case. With his long, white, nervous fingers he adjusted the delicate needle, and rolled back his left shirt-cuff. For some little time his eyes rested thoughtfully upon the sinewy forearm and wrist all dotted and scarred with innumerable puncture-marks. Finally he thrust the sharp point home, pressed down the tiny piston, and sank back into the velvet-lined arm-chair with a long sigh of satisfaction.

The opening paragraph of The Sign of Four shows Holmes the drug addict, in this case injecting a seven percent solution of cocaine much to the disgust of Dr. Watson. This was turned into a particularly powerful scene in “The Secret of Sherlock Holmes”, a play starring Jeremy Brett and Edward Hardwicke that I saw in 1988 at Wyndham’s Theatre in London’s West End. These two actors, for me at least, are the definitive Holmes and Watson and to see Brett as Holmes in silhouette at the back of the stage injecting into his arm before the lights were cut at the end of the scene is a dramatic act that has stayed with me for over 30 years.

As for the book itself it is much better written than the first although there is again a large section of back story at the end. This time it is much shorter than in “A Study in Scarlet” and rather than being a standalone tale it is given as Jonathan Small telling his involvement in the crimes at 221b Baker Street with Holmes, Watson and in this case Athelney Jones of the Yard. This is a considerable improvement as the three can react to Jonathan Small’s story and there is no massive disjointed section. This is also the first appearance of probably the most famous Holmes quote

How often have I said to you that when you have eliminated the impossible whatever remains, however improbable, must be the truth?

Still back to the beginning, Dr. Watson is trying to draw Holmes away from the cocaine over breakfast the next day when a young lady by the name of Miss Mary Morstan arrives and lays out a singular problem for the great man. Her father had returned to England eleven years ago and disappeared without trace however each year for the last six she has received a fine pearl from an anonymous benefactor and now she has had a letter from him desiring her to be at the Lyceum theatre and she can bring two companions. Naturally Holmes and Watson are willing to go but for very different reasons, Holmes to solve a puzzle but Watson has fallen for Miss Morstan almost immediately and in this state would do anything for her.

Without giving away the plot, the pearls are quickly revealed to be part of a large treasure and in searching for the remainder Holmes engages the use of a scent hound to follow a creosote trail left by one of the culprits from a house in Norwood after he stepped in some of this highly pungent liquid, and this provides one of the few bits of genuine humour in the books as the dog getting confused by crossing trails eventually comes to its mark…

On the dog raced through sawdust and shavings, down an alley, round a passage, between two wood-piles, and finally, with a triumphant yelp, sprang upon a large barrel which still stood upon the hand-trolley on which it had been brought. With lolling tongue and blinking eyes, Toby stood upon the cask, looking from one to the other of us for some sign of appreciation. The staves of the barrel and the wheels of the trolley were smeared with a dark liquid, and the whole air was heavy with the smell of creosote.

Sherlock Holmes and I looked blankly at each other, and then burst simultaneously into an uncontrollable fit of laughter.

Another funny passage occurs with Watson attempting to take Miss Morstan’s mind off the danger they may be in with some of his tales from Afghanistan.

To this day she declares that I told her one moving anecdote as to how a musket looked into my tent at the dead of night, and how I fired a double-barrelled tiger cub at it.

Miss Morstan has done me the honour to accept me as a husband in prospective.

Next week I start on the short stories first printed in The Strand Magazine between 1891 and 1893. Will Watson still be living with Holmes or are he and Mary setting up home together with him merely reporting from the sidelines?