In 2010 BBC Radio 4 ran a fascinating series where the then Director of the British Museum in London chose 99 objects from the museums collection to illustrate world history. Each object was described in its own radio programme over a period of several months and soon became addictive. By Christmas a book had been produced which not only included versions of each lecture but importantly had a really good photograph accompanying it. MacGregor had done a wonderful job describing each item for the radio but the inclusion of pictures completed the project.

The book is over seven hundred pages long to cover properly the 100 objects in the series and has an excellent index and bibliography which alone makes the book an invaluable companion to the series. The 100th object was chosen by MacGregor from suggestions by listeners to represent the modern day and was purchased by the museum to complete the collection. Fortunately both the BBC and the British Museum regard this as a milestone project so all 100 episodes are still available as downloadable podcasts from this BBC site. The museum also maintains a series of web pages dedicated to the project including a programme by programme set of pages which also tell you where the object can be found in the museum if it is currently on display (at the time of writing 21 of the 100 objects are not in a museum gallery). 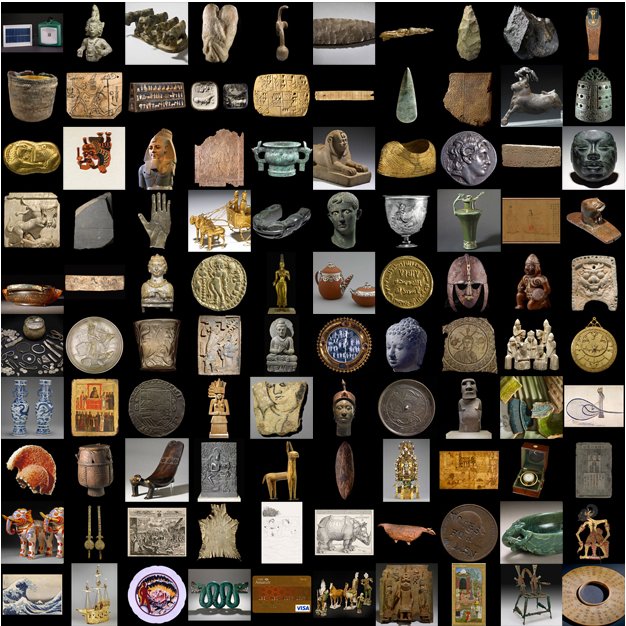 The above mosaic shows all 100 objects and as you would probably guess this is not a book you can really just sit and read. Not only from its sheer length, but also from the way it was created from 100 separate lectures which were never intended to be listened to one after an other although it does make sense to hear or read them in sequence. Having loved the series from its inception I of course bought the book when it came out but still I tend to listen to Neil when I want to delve into the series, preferably with the book to hand so that I can admire the object as he talks about it.

We start with the mummy case of Hornedjitef and end with a Chinese made solar lamp and charger but I’m just going to pick out five of my favourites:-

So this short article before I hit my planned August reading marathon for this year is yes a suggestion that you should obtain and read the book but really  a big hint to check out the podcasts available via the links I have included and enjoy a master at work.