To give the book its full (and misleading) title “A Sentimental Journey through France and Italy. Why misleading, well in the copy I read, which is 161 pages long, by page 143 he is still in Paris having travelled there from Calais on page 1, after that there is a rapid dash as far as Lyon which is where the book ends. Sterne undoubtedly intended to continue the tale in a further volume, as he had done numerous times with his much more famous novel regarding ‘The Life and Opinions of Tristram Shandy’ which eventually ran to nine volumes, but he died just three weeks after this book was first published in 1868. 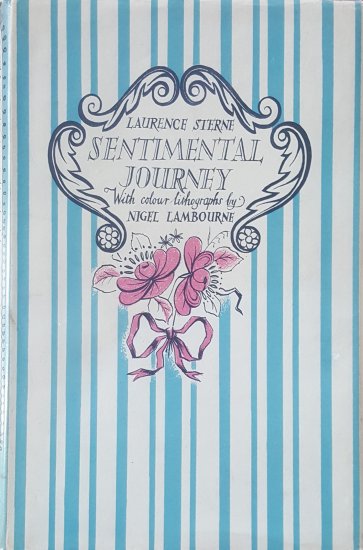 I have two copies of this book on my shelves, both there due to them being parts of separate book collections rather than a desire to own a copy of the novel but it did feel that it was time to tackle the book as it is regarded as a classic of English literature. That this is so is attested by the fact that the Folio Society edition I have read is only the fourteenth title produced by that publisher and came out in 1949. The other copy I have is from 1938 and was part of the ten books published by Penguin as Illustrated Classics which were their first attempt at a series of illustrated books, just three years after they started publishing. That two major publishers should select it so early in their existence suggests how much both companies rated the book and both editions are beautiful. The Folio Society copy is illustrated by Nigel Lambourne in lovely drawings that match well his cover design, see the picture of Maria further down this essay. The Penguin edition, in common with the other nine volumes published simultaneously, uses wood engravings in this case by a master of that art form Gwen Ravarat. 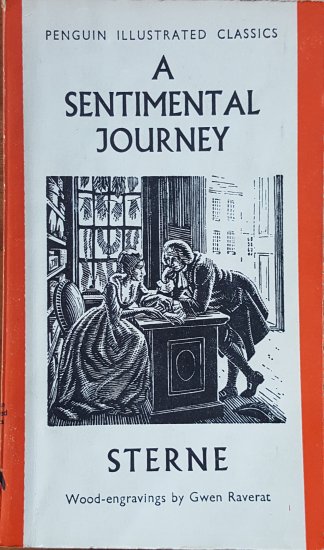 And so to the tale itself… Well I have to admit that of all the books I have read so far for this blog this was the one I struggled with the most. Even though it is quite short (less than forty thousand words) it has taken over three weeks to read it as I kept putting it down after a few pages. Both the Maupassant short stories and The Pillow Book by Sei Shōnagon have been read and written about whilst I worked my way through A Sentimental Journey. There are two main reasons for this, firstly I couldn’t get on with Sterne’s style of writing and secondly it really needs a significantly better knowledge of French than I have so I have had to pause to translate sections before continuing if I really wanted to make sense of the narrative especially in the case of a letter which is important to the story but which is entirely in French. A random sample of the text, where Yorick (Sterne’s alter ego in the story) employs a servant is below.

La Fleur had set out early in life, as gallantly as most Frenchmen do, with serving for a few years; at the end of which, having satisfied the sentiment, and found, moreover, That the honour of beating a drum was likely to be its own reward, as it open’d no further track of glory to him,—he retired à ses terres, and lived comme il plaisoit à Dieu;—that is to say, upon nothing.

—And so, quoth Wisdom, you have hired a drummer to attend you in this tour of yours through France and Italy!—Psha! said I, and do not one half of our gentry go with a humdrum compagnon du voyage the same round, and have the piper and the devil and all to pay besides?  When man can extricate himself with an équivoque in such an unequal match,—he is not ill off.—But you can do something else, La Fleur? said I.—O qu’oui! he could make spatterdashes, and play a little upon the fiddle.—Bravo! said Wisdom.—Why, I play a bass myself, said I;—we shall do very well.  You can shave, and dress a wig a little, La Fleur?—He had all the dispositions in the world.—It is enough for heaven! said I, interrupting him,—and ought to be enough for me.—So, supper coming in, and having a frisky English spaniel on one side of my chair, and a French valet, with as much hilarity in his countenance as ever Nature painted in one, on the other,—I was satisfied to my heart’s content with my empire; and if monarchs knew what they would be at, they might be as satisfied as I was.

Another problem I had was the references to Tristram Shandy (which I have not read) including a whole section near the end of the book where Yorick goes off to comfort one of the characters from that novel thereby further muddying the narrative of this supposed travellers tale unnecessarily.

alas! I have but a few small pages left of this to crowd it into,—and half of these must be taken up with the poor Maria my friend, Mr. Shandy, met with near Moulines.

The story he had told of that disordered maid affected me not a little in the reading; but when I got within the neighbourhood where she lived, it returned so strong into the mind, that I could not resist an impulse which prompted me to go half a league out of the road, to the village where her parents dwelt, to enquire after her.

’Tis going, I own, like the Knight of the Woeful Countenance in quest of melancholy adventures.  But I know not how it is, but I am never so perfectly conscious of the existence of a soul within me, as when I am entangled in them.

The picture of the distraught Maria from the Folio edition is below.

Enough of the negatives however, I persevered with the book rather than abandoning it because hidden behind the irritating (at least to me) overly stylistic writing is actually a pretty good story if only the first part of it. Laurence Sterne had indeed travelled through France and Italy in 1765, which was a couple of years after the Seven Years War had ended and he sets the story with Yorick making a similar trip but earlier so the conflict is actually still in progress. That it has no impact on his ability to travel through the country other than the need to get a passport authorising the journey, something Yorick had neglected to do before setting out thereby creating part of the story as he endeavours to obtain such a document before the police catch up with him, is surprising to modern readers. Although the title implies that this is a travel book do not expect any descriptions of places, rather it is a tale of his interactions with the people he meets, especially the ladies, and that is what makes it A Sentimental Journey.

If you wish to read the novel for free then it is available on Project Gutenberg by following this link.