Subtitled ‘Neanderthal Life, Love, Death and Art’ this book gives a comprehensive overview of not just what we know about Neanderthals but also how we got to this level of knowledge where such a book covering those topics and many more could be written. A superb piece of research that has deservedly been one of the science highlights of the last year, it only came out in the summer of last year and has yet to appear in paperback but my copy is already the seventh impression of the hardback which suggests excellent sales. The real surprise, to me at least, is just how much our knowledge of Neanderthals has advanced in the last two decades due to much better archaeological techniques which more accurately map the various strata of a dig and the positioning of thousands of objects but also from the DNA analysis that is now possible.

Although aimed at the interested amateur Sykes makes some assumptions regarding the knowledge of the reader in the terminology she uses. For example ‘analysing the calculus’ is not explained for well over a hundred pages from when it is first used. When it is defined it turns out to mean studying the teeth, or more specifically the residues built up on the teeth of the fossil remains rather than the obviously wrong, but entertaining until proved otherwise, that Neanderthals had somehow grasped differential mathematics. The complexity of various rock knapping techniques and how this helps define groups of Neanderthals who must therefore have interacted with each other is very well explained although I would have liked more diagrams to illustrate this to make the differences clearer. The last time I read a book on this subject was definitely over two decades ago so a vast amount of information in this book was new to me and as it is 380 pages long there is a huge quantity to take in.

It is very well written, and whilst the necessary vocabulary did sometimes have me checking on Google to make sure I understood this was a relatively rare occurrence as for the most part terms are explained as they are needed, with the obvious exception of calculus, however a small glossary at the back along with the detailed index would have been useful. Sykes can’t resist the occasional pun either such as ‘harvest the data’ when referring to gathering evidence of plant eating and this lightens the tone of what could have been in a lesser writers hands quite a dry study making it very readable and engaging.

The opening chapter deals with the slow growth of knowledge about Neanderthals from when they were first discovered just over 160 years ago and then through the book we are introduced to the 99 sites that remains have been discovered at right across not only Europe, which was their heartland but the ones in the near and far east which I had never heard about, there is a useful map on the front end papers which shows this spread. As you would expect from such an all encompassing subtitle Sykes attempts to not just document the artefacts found but also place them into context of the living, breathing people that used them. Just how would such a chipped rock be used? Were they making personal adornments? What can the spread of hearths (areas where a fire was lit rather than necessarily anything physically built) within a cave complex tell us about the size of the population using the shelter or the timescales that a place was used? How did they co-exist not just with each other within clan groups but with other clans and even Homo Sapiens when they appeared on the scene moving into Europe from their African homelands hundreds of thousands of years later? All of this and more is covered, it is definitely a book that will repay rereading in a few months to fully take in the sheer mass of information.

According to her introduction Sykes completed the book in June 2020 and hints at several, as yet unpublished, studies that she has clearly had access to meaning that this truly is as up to date as it was possible to be. But with the indicated speed of advances, especially in DNA analysis, either a revised and updated version or even a second volume must be a possibility in a few years time. Even the fact that she completed the book during lock down for the coronavirus pandemic becomes significant, we still don’t know why Neanderthals disappeared, was there perhaps a contagion brought by Homo Sapiens that further weakened the existing population, struggling as it was with climatic changes 40 thousand years ago as the continent swung from glaciation to warmer temperatures and back again. Of course they never truly went away, DNA analysis proves this, modern humans, at least outside those of African descent, have a small percentage of Neanderthal DNA and knowing this the story of this ‘lost’ people gains even more relevance today.

The one criticism that I do have is the unnecessary fanciful opening sections to each chapter in either prose or verse, lasting between a half and a full page of text, they add nothing to the rest of the work but fortunately can be easily skipped as they are in italic. Clearly influenced by Jean Auel and her very good Earth’s Children series of novels set in the time of the Neanderthals, I started off reading these chapter preambles but after chapter five just left them out. 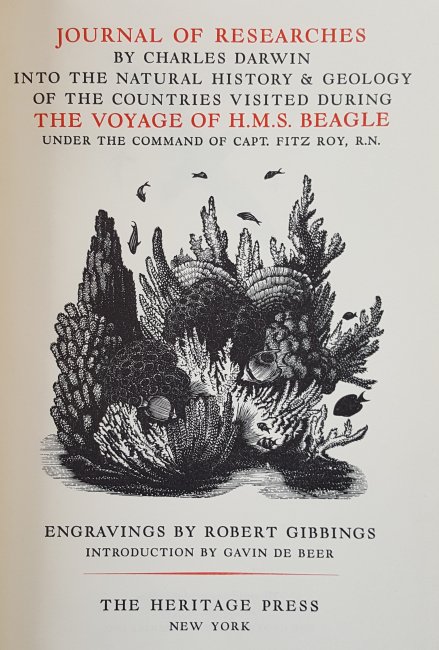 At over 206,000 words this is the second of the three large books for my August scientific reading marathon. I chose it in preference to The Origin of Species (first published 1859) for several reasons, including the fact that it is a lot more readable, but mainly because in this you can see Darwin slowly edging towards the theory that would make him famous. This is especially true of the second edition (1845, the first edition was in 1839, twenty years before his more famous work), the text of which is used for this book as Darwin altered sections in light of his research and developing thoughts. Another reason is that I love the work of Robert Gibbings who illustrated this Heritage Press volume. Although called a journal which implies a diary like approach, and yes most of the entries do have the date at their start, it is not chronological. We do bounce around a bit for a few years as The Beagle was on a nearly five year surveying mission so tends to revisit places several times and Darwin to make things clearer and avoid the obvious repetition has entries that may be months or years apart but which are put together because geographically they make more sense that way. It actually took me a while to realise what was going on and it was only when I stepped back a couple of pages to refresh my memory that I spotted that the entry there was two years after the one I was reading.

Throughout the text you can see Darwin edging towards evolution and the concept of gradual change in species. He also references many species which have the dubious distinction of being ‘described by Darwin but now extinct’ including a type of cattle in South America and on the Falkland Islands a species of wolf which he describes as a fox when he sees it and noted it’s decline.

Their numbers have rapidly decreased; they are already banished from that half of the island which lies to the eastward of the neck of land between St Salvador Bay and Berkeley Sound. Within a very few years after these islands shall have become regularly settled, in all probability this fox will be classed with the dodo, as an animal which has perished from the face of the Earth.

This may well be the earliest documented use of the dodo as a reference point for extinction of a species.

When you think of Darwin’s voyage then most people automatically think about the Galapagos Islands but in truth he spent very little time there arriving on 15th September and on his way to Tahiti by 20th October 1835. Just over a month out of a almost five year voyage and they take up in this edition twenty seven pages out of almost five hundred despite having more illustrations than most other sections. What we do get is a basic description of what have become known as Darwin’s finches as he realises that the bill shapes on different islands vary dramatically in order to make best use of the food supplies found there. Despite the giant tortoises being the most famous residents and symbol of the archipelago it was the finches that really drove his realisation of what became known as evolution. He is also one of the first people to accurately describe the marine iguanas found exclusive on these islands and notice their diet of seaweed rather then the belief up until then that they were after fish.

When reading the book one thing you notice is just how much time Darwin isn’t on board The Beagle, he goes off on long expeditions inland sometimes for weeks at a time whilst Captain Fitzroy is engaged on his duties creating charts for the admiralty. You therefore get long passages where he either makes circuits when the ship will be in one place for a period of time or he arranges to meet the vessel at a specified port further along the coast. The observations he makes away from the coastal areas add greatly to his geological studies and give fascinating diversions to life on board ship, but I suspect they are also inspired by his desire to be on solid ground due to the really bad seasickness he was prone to, which almost made him leave the expedition within a few weeks of the start. Science was greatly enhanced by his decision to keep going regardless but it was so close to being abandoned before he could make any of his discoveries. 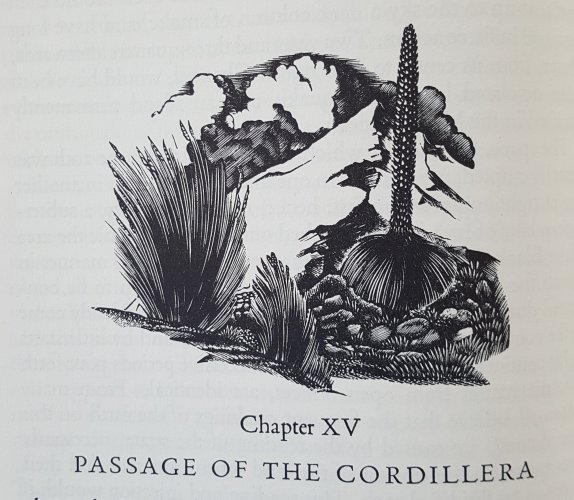 Towards the end of the book the Beagle goes to the Keeling Islands and it is here that Darwin comes up with a theory for how coral islands and reefs are formed and ultimately writes another book on the subject. This is one of the few passages where the text becomes difficult to follow as he references maps from the other book without the reader of this volume having access to them, but there is enough for you to understand the process proposed. Other than this section the book is extremely readable even in this full form. Most versions printed nowadays, including the Penguin Classics edition are heavily edited and have more than 25% removed coming out at less than 150,000 words, which is still a substantial work but I would rather read a complete edition.