Salman Rushdie is best known as a novelist, but he has written a few non-fiction books and this was his first. Originally published in 1987 and subtitled A Nicaraguan Journey even Rushdie in his new introduction to my edition written 10 years after first publication admits…

In the last ten years the world has changed so dramatically that The Jaguar Smile now reads like a period piece, a fairy tale of one of the hotter moments in the Cold War.

By the time I first read the book, almost a further 10 years on again in 2006, I was also in Nicaragua and the story was coming full circle although I didn’t know that when I arrived. 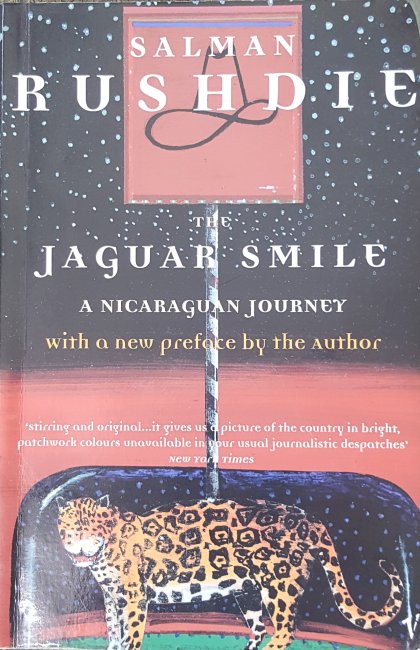 But first a little history to set the book in its time and to provide background to the various characters. We need to go back to the US occupation of Nicaragua which lasted from 1909 to 1933 and which was opposed in a guerrilla war by a group led by Augusto Sandino. When the Americans left Sandino agreed a peace treaty with the new regime but on his way home from the signing banquet he was assassinated on the orders of the commander of the National Guard, Somoza who in 1937 took power himself and so began a 42 year brutal dictatorship led by his family. They siphoned off all the money they could from the country during their time in power especially the aid funds to rebuild the capital, Managua, following a devastating earthquake in 1972 this meant that when they were finally deposed in 1979 it was estimated the family wealth was in the region of $1 billion ($3.5 billion today) and all from a relatively poor small country of just three million people. They were overthrown by a rebel group who call themselves Sandinista’s in honour of the 1930’s rebel leader, whose profile now stands high above Managua. 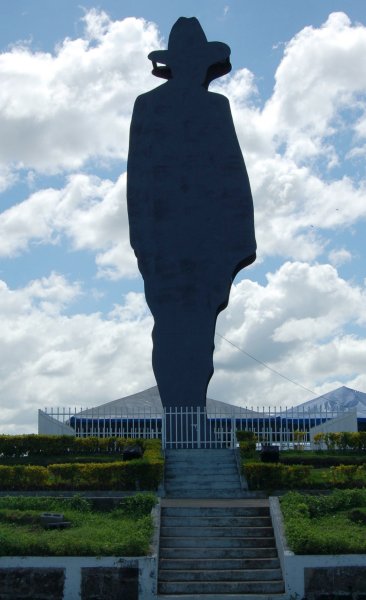 And this is where Rushdie comes in, he arrived in 1986 during yet another revolution, this time by a group called the Contra’s and financed by the Reagan administration in the USA in an attempt to overthrow the Sandinista government, even though the US Congress and the International Court of Justice in the Hague deemed such actions as illegal. The fighting was brutal with the Contra’s targeting the civilian population with kidnapping, rape and random murders being their main strategy to try to wear down the people rather than attacking the military forces of Nicaragua. That is not to say that the Sandinista’s were blameless and he makes a fair attempt to provide a balanced view of the situation. He had excellent access to almost all the government leaders and as a novelist he seems to have been able to talk to them (most of which were published novelists or poets themselves) as an equal and therefore get past the politics to be able to put issues regarding press freedom, food shortages, repression of the Catholic church and other items directly to even the president Daniel Ortega himself. There is a whole chapter detailing an interview with Ortega.

All of the leaders point out that they are at war and it is difficult to do things in such a context, and that the food shortages were mainly due to the US blockade and mining of the only deep water port in the country which was a fair point. They are however able to point to successes such as the reduction in child mortality, this would be halved by the time they lost power in 1990 and a significant increase in literacy (although this was not as big as they claimed), which was a priority for a government led in the main by writers. That the capital was still in ruins, and presumably still is, it certainly was when I was there twenty years after Rushdie, was not really a surprise either with the Somoza’s having emptied the country’s coffers when they fled into exile.

As well as having excellent access to the leadership Rushdie also manages to travel round the country to a certain extent, obviously the border areas, especially those with Honduras were too dangerous to enter, but he did manage to get over to the Caribbean coastal area of Bluefields which as usual was in the middle of storms throughout most of his time there and he memorably describes as

This is a really interesting section of the book. The Sandinista’s had completely messed up their control of this part of the country and were only then coming to recognise that the west (where they were) and the east were very different places, indeed there wasn’t even a road joining the two sides of the country and the east was (and still is) really really poor. There was slowly coming into place a new policy called “Autonomy” where the east would have more control over its own governance and the wildly mixed population could return to their own localities.

In Bluefields it was often difficult to remember I was still in Nicaragua. The west coast was, for the most part, homogeneous, but here, as well as Mestizos, there were Creoles, three different Amerindian tribes and even a small community of Garifonos, who shouldn’t have been there at all, according to the textbooks, but up in Belize. And that wasn’t the only difference. The majority of the inhabitants here were not Catholic, but belonged to the Moravian church. And a large proportion of them were English speaking to boot.

I had arrived in Bluefields via a small plane from The Corn Islands, a pair of islands about 70km (roughly 45 miles) off the coast from Bluefields where I was when the result of the elections that we had been following since arriving in Nicaragua were announced. These two islands are a tropical paradise and made the poverty in Bluefields even more striking.

In 1990 the Sandinista government lost the election and would be out of power for sixteen years. The government that replaced them was led by Violeta Chamorro, the widow of a journalist who had been assassinated by the Somozo regime and whose paper had been closed down by the Sandinista’s so there was no love lost between her and Ortega. Rushdie also has a chapter interviewing her in the book and although he ends up being less than impressed by her she would be the person credited as bringing an end to fighting in Nicaragua after decades of various struggles.

Salman Rushdie makes a creditable attempt to understand Nicaragua and present as balanced view as was possible at the time. If he went there now I’m sure he would write a very different book, the Sandinista’s are still led by Daniel Ortega and he is still president thirteen years after the election I witnessed but for how much longer? There is considerable unrest in Nicaragua again and this time the Sandinista government are the ones putting down a rebellious populace. It’s a pity, it is after all a beautiful country with friendly people and a fantastic place to be and I thoroughly enjoyed this book whilst I was there and it’s subsequent rereading for this blog. Yes it’s dated but it’s still definitely worth a read.