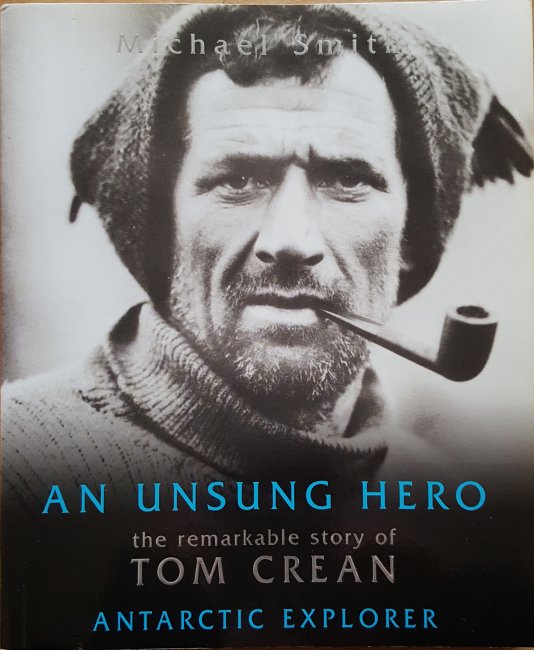 Roald Amundsen, Robert Scott, Ernest Shackleton, Tom Crean. The first three Antarctic explorers listed are household names but Tom Crean is, as the title of the book implies, largely unknown. But he should be celebrated, as he took part in three of the main British Antarctic expeditions during what became known as The Heroic Age of Antarctic Exploration during the first two decades of the 20th century.  He  was with Scott and Shackleton on the Discovery Expedition from 1901 to 1904 which at the time set the record for furthest south at 82° 17′. He was then with Scott on his ill-fated Terra Nova expedition from 1910 to 1913 and Scott’s attempt on the South Pole, where he was beaten to it by Amundson and died on his way back to the ship. Crean was later with Shackleton on his failed Imperial Trans-Antarctic expedition on the Endurance from 1914 to 1917 where the Endurance sank early in the venture. Shackleton walked his men to Elephant island and then chose four to go with him for help in an open boat across over eight hundred miles of the South Atlantic to South Georgia and Crean was one of those who was part of possibly the greatest feat of seamanship seen in the last hundred years.

So why is he so barely known, apart from those of us with a fascination with Polar exploration? Well part of the reason is that Crean was really only semi-literate, so he left no diaries or any other documentation for posterity; he also never gave any interviews and the four medals he earned in the Antarctic weren’t displayed. Apparently he never even told his daughters about his exploits in Antarctica. The sole hint that here was a man with his background in exploration was that when he left the navy in 1920 he opened a pub in his home town of Annascaul in Southern Ireland which he called The South Pole Inn. The pub is still called that and in 2003 a statue of Crean was erected in the town, so maybe wider recognition is finally happening for this quiet and self-assuming man and it may well have been helped by this excellent book which was originally printed in 2001, my copy is the first paperback edition from 2002 also published by Headline.

Despite the lack of much documentary evidence from Crean himself Michael Smith has done an excellent job of research to piece together his life from lots of sources. Sixty six books are listed in the bibliography, quite a few I already have in my small Polar library and this list has pointed me to others that sound worth adding to my collection. There are also numerous letters, unpublished diaries and other documents that have been consulted. All this has made a beautifully illustrated book of over three hundred pages which tells not only the story of Tom Crean but also the expeditions that he took part in.  He was in the group of the last eight men on the Beardmore with Scott when he chose the last five to make the final push for the pole. That Scott decided not to chose him may well have been an error as Crean was still fit and strong unlike Oates who had an injured leg and Taffy Evans’ badly cut hand, both of which for reasons of his own Scott decided to take with him. That this undoubtedly saved Crean’s life and allowed him to continue his polar explorations with Shackleton a few years later. What can only be wondered is if Scott had taken the fitter Crean then would his party made it back to the food depot they were aiming for when they died on the ice. We will never know, Michael Smith makes it quite clear where his opinion lies:

Scott, it must be said, made two basic mistakes in selecting his final party to reach the pole. First, he chose the men at the wrong time and second he chose the wrong men.

Shackleton on the other hand greatly valued the taciturn and powerful Irishman, not only selecting him for the crew of the Endurance but picking him as one of the four to go for help with him in that open boat when the expedition became a rescue mission. I’ll cover this in a later blog as I have been in awe of that journey since first reading about it as a child. After returning from the expedition Crean joined the war effort and Shackleton encouraged him to get promotion, along with writing to the First Lord of the Admiralty personally recommending his promotion. This he duly got and after the war ended up with a reasonable pension, which along with money sent to him by Shackleton enabled him to open the South Pole Inn. Shackleton tried to convince Crean to join him again on a trip south but by this time he was a family man with two daughters and declined, his exploring days were behind him.

Michael Smith has written a hugely enjoyable book about one of the lesser known great Polar explorers and even if you know nothing about the history of the time it is well worth reading.