Phil Buck is an American adventurer and admirer of Thor Heyerdahl who conceived of a plan to sail from Chile to Easter Island in a primitive reed boat back in 1999, something Heyerdahl himself never managed, and this is the story of how eight men (and a duck) amazingly made the 2,500 mile journey in 44 days starting in February 2000. Nick Thorpe was travelling round South America submitting pieces of journalism back to his home in the UK when he found out about this great adventure and wangled himself aboard on the basis of having a little sailing experience but more importantly being able to document the trip after the original journalist pulled out. The book, Nick’s first, is a surprisingly candid story of how eight men, from various nationalities and wildly diverse personalities came to bond together in adversity as their ship, the Viracocha (named after the creator god of Inca mythology), slowly became waterlogged and started sinking around them. That the boat was going to get waterlogged and either sink or break apart at some point was well known to all who sailed on her, the hope was that she would do so after completing the voyage rather than during.

The ship was just 64 feet long and 16 feet at its widest point so it was pretty cramped on board especially with all the provisions and extra reeds and wood needed to make emergency repairs stashed on board and this inevitably led to conflicts between the crew which needed to to be sorted out as soon as possible because of the lack of space and the need for everyone to work together as much as they could but largely the crew got on with each other although Nick doesn’t shy away from discussing issues that did arise between them. Having said that the book is largely positive and is a fascinating tale of daring do by a group of men who had little if any seafaring experience just a lot of determination to be the first to sail a primitive boat across the South Pacific in modern times, not so much to prove that it had been done in the distant past leading to the original settlement of Easter Island but to prove that it could be done. Sadly for the non human part of the crew they started off with two pet ducks but one escaped and jumped ship about a thousand miles from the South American coast so only one duck made the complete journey, hence the title of the book.

Phil Buck has since had two more goes at crossing the Pacific in reed boats, in Viracocha II (2003) and Viracocha III (2019) both of which intended to get all the way to Australia from Chile. The second vessel was damaged during launch but still managed to get to Easter Island whilst the third sailed for 86 days before being caught up in a storm and eventually abandoned as no longer seaworthy near Tahiti. Sadly there doesn’t appear to have been any follow up books documenting these voyages, Nick Thorpe wasn’t part of the crew for either trip and neither was anyone else on board up to writing a companion volume. Thor Heyerdahl would not have been impressed, his books led to his worldwide fame and whilst his theories about early migration are, to say the least, not widely accepted the books raised money and his profile to enable funding of further voyages and other projects.

This book was a paperback original published by Little, Brown in 2002.

I saw that island first when it was neither night nor morning.  The moon was to the west, setting, but still broad and bright.  To the east, and right amidships of the dawn, which was all pink, the daystar sparkled like a diamond.  The land breeze blew in our faces, and smelt strong of wild lime and vanilla: other things besides, but these were the most plain

So begins The Beach of Falesá one of Robert Louis Stevenson’s lesser known tales which is set in his beloved South Pacific where he lived from 1888 until his sudden death in 1894 aged just forty four. He is buried in Samoa.

My edition of this book was published by The Folio Society in 1959 and is illustrated by the wonderful Clarke Hutton who also illustrated many of the Penguin and Puffin books on my shelves. At just under twenty nine thousand words it is more of a novella than a novel, although the Folio edition stretches it to 129 pages including a ten page introduction by H E Bates. The story was originally printed in the Illustrated London News and is normally published along with two much shorter stories (The Bottle Imp and The Isle of Voices) under the title of Island Nights Entertainments. The tale concerns the arrival of John Wiltshire to take up his post as a trader on the island to replace John Adams who had died in mysterious circumstances and how he finds out what is really going on.

Large parts of the book, specifically conversations between the Europeans and the natives are written in Pidgin English which can be off putting at first and it is also assumed that you know what several words that Stevenson would have understood actually mean. For example the main product that the trader is there to collect in payment for his goods is copra – the dried white meat of a coconut used to produce coconut oil. He also refers to the natives as Kanaka which is here used as a generic term for Pacific island workers but originally derives from the indigenous peoples of New Caledonia. Coconut is also spelt throughout as cocoanut which is now an archaic spelling.

On arrival Wiltshire meets another trader called Case who it turns out will be the main protagonist of the story and it is decided that Wiltshire should have a ‘wife’ to look after him on the island and a native girl Uma is tricked into the role by Case. Because she cannot read English the document that she treasures actually reads…

John Blackamoar.
Chaplain to the hulks.

Extracted from the Register
by William T. Randall,
Master Mariner.

This clearly indicates the contempt that the white people already on the island hold for the natives, Wiltshire, to his credit, quickly regrets the nature of this and when he meets the missionary gets him to do the marriage properly as he realises that he does love Uma. 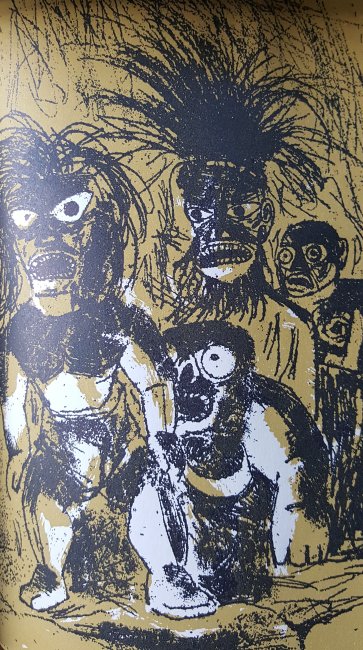 One of the main problems with the book to modern readers is the casual racism which was so common at the time the book was written. The natives are looked upon as little more than children, in fact at one point Stevenson makes this explicit

It’s easy to find out what Kanakas think.  Just go back to yourself any way round from ten to fifteen years old, and there’s an average Kanaka.  There are some pious, just as there are pious boys; and the most of them, like the boys again, are middling honest and yet think it rather larks to steal, and are easy scared and rather like to be so.

Having said that Stevenson doesn’t portray any of the white men in a particularly positive way, Case is a particularly nasty piece of work and Captain Randall is a gin sodden wreck. The missionary is a reasonable character but Stevenson (through Wiltshire) makes it clear that he doesn’t approve of the work of the missionaries in the islands.

Stevenson nowadays is regarded more as a childrens’ author, with Kidnapped and Treasure Island being his best known works along with a book I still have from my early library A Child’s Garden of Verses. But this at least is definitely aimed at an adult readership.