One of the joys of collecting Penguin Books is the wide variety of titles and series that they published over the years and especially exploring the ones that failed to take off.  There are more dead ends and random corners to explore in Penguins first 15 years of publishing than in a M.C. Escher painting. One of these was the well intentioned but ultimately seriously curtailed series The Things We See, book one of which is shown below.  They were assigned the letter code E to distinguish them from other Penguin series so E1 became Indoors and Out.

When I first started collecting Penguin, well before the advent of the internet and its ease of tracking down items around the world, I came to think of these as The Things We Don’t See as I so rarely came across one in a shop on my searches although they are not in fact that scarce and you can certainly pick up examples for £5 to £10 nowadays quite easily.

The Things We See was intended to be a departure from the normal Penguin style. Hardback books each of 64 pages, printed on art paper and significantly larger than their normal paperback production at 220mm tall x 182mm wide and looking at design of everyday objects. This had been touched on via several Pelican books (Penguins factual imprint) but the desire was to produce a series of high quality books on all aspects of the subject. Unfortunately they immediately hit several problems. The main one being the major paper shortage immediately after WWII in 1946 when the series was supposed to start along with the relatively high purchase cost at 3 shillings and sixpence, just over £7 today which sounds good until you realise that it is 3½ times the price of a ‘normal’ Penguin or Pelican at the time. A small number of Indoors and Out did make it on sale in 1946 as a special pre-issue publication but the majority arrived in 1947. It was intended as the introduction to the series and carried an impressive list of titles in preparation to give an idea of the intended scope:

Other projected titles given, but with no author, so presumably not as advanced in production were Toys, Domestic Equipment, Shops and Cinemas, The Things We Wear. This would have given the E series an initial list of 17 titles however only 7 were ever printed, the ones in bold above being the remaining 6 to come out.

1947 was a good year for The Things We See as 3 more titles made it out that year. E4 Pottery and Glass was the next to appear as can be seen from the list of titles on the back which still has E2 and E3 as ‘in preparation’ and the list of titles has already been considerably cut back as it rapidly became clear that a) there was not enough paper and b) they weren’t selling very well. Only E1 was ever produced in hardback all the others are softback editions at the lower price of 2 shilling and sixpence, representing a 28% price cut; although this appears to have been a last minute decision as the old price is blocked out in black and the new overprinted on the inside flap of the dustwrapper. As can be seen on the rear cover of E3 Furniture; shown above; there is a long overprint removing the line

The rear of E2 Houses is the same as E3.  So what do the books look like inside? Well lets open E4 Pottery and Glass. 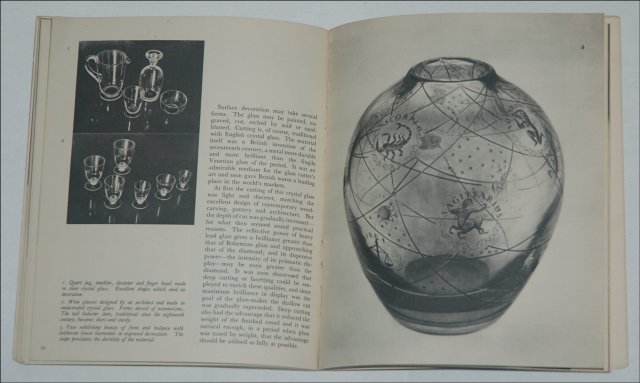 They are very attractive photogravure printed volumes with lots of photographic illustrations, it is clear that these would have been expensive to produce so the dramatic cut in price cannot have helped the viability of the series as a whole.  That these books are still around was down to Penguins policy of just holding onto something until it eventually sold. Unlike a lot of publishers that would probably have pulped a lot of unsold stock to make way for new titles Penguin, under Allen Lane at least, very rarely did this. The next two titles to appear were E5 Public Transport in 1949 and E6 Ships in 1950, both still priced as 2 shillings and sixpence.

These two are probably my favourites from the series, they are very readable and the illustrations invoke the era they come from so well 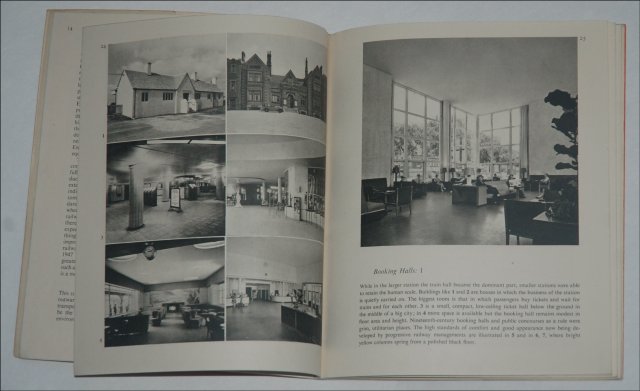 Ships has a quote from The Architectural Press on the inside of the dustwapper, which turned out to be completely wrong:

To judge from the first few volumes the series called The Things We See ought to prove the most successful of all the contributions made by Penguin Books to visual education. Well designed, well illustrated and well printed they are remarkably cheap by any standard. Moreover the author of each has been given his head, within the limits imposed by considerations of space, and by bringing his heart too has produced a highly readable essay which is all the better for being in some degree a profession of personal faith.

Sadly there was only to be one more title produced and for that we had to wait another 3 years.  1953 saw E7 Gardens by Lady Allen of Hurtwood and Susan Jellicoe. The latter author was not mentioned in the original plan for the book so possibly she was drafted in to make sure this book actually came out.  The price however had doubled to 5 shillings and the eye design cover was abandoned to make the book look more attractive to a post austerity public. 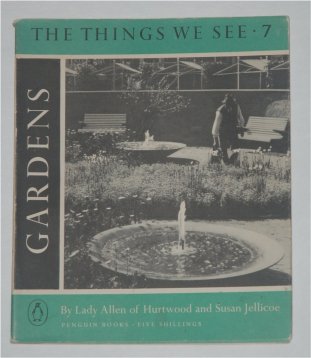 All the titles were relaunched with photographic dustwrappers over the top of the unsold stock dating back up to 6 years. Only E3 Furniture was actually reprinted with revisions for this relaunch all the rest were just what was still sitting in the warehouse so there must have been a highly tedious exercise in removing all the old wrappers and putting new ones on. Only Furniture and Gardens have photographic covers under the wrapper all the others retain the old eye cover.

Several illustrations in Furniture were replaced as part of the revised edition and its price was increased to 3 shillings and sixpence alongside E1 Inside and Out which had never been reduced in price, the others stayed at the lower price. 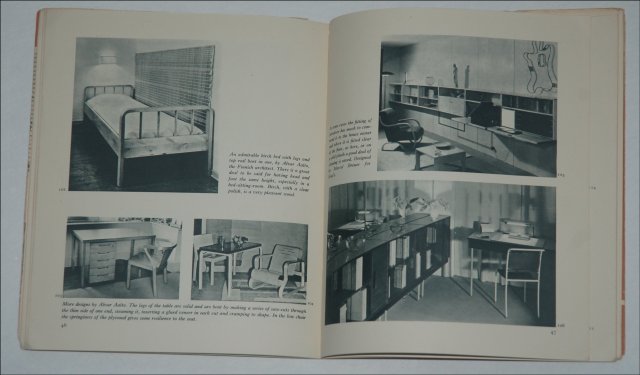 This is from the revised edition, only the birch bed (top left) was in the original 1947 book, the new pictures show a far more contemporary look in order to update the subject.

Presumably the books continued to slowly sell and the relaunch managed to clear some of the backlog of books making the effort of recovering all of the old stock worthwhile. Penguin meanwhile had other ambitious projects to handle by then and The Things We See was left to slowly fade away.  A sad end to what could have been a most interesting set of books.

Why not get hold of some, they are cheap enough, and enjoy, what is after all, a 70 year old series and therefore now significant in studying the history of design not just from their contents but also from the design of the books themselves. Three of the titles E1, E6 and E7 won design awards from the National Book League when they were published so were recognised as significant pieces of work even then.