The complete OED is ninety years old this year so it a good opportunity to look both at my copy but also the history as to how this massive work came to be produced. Unlike almost all other dictionaries the complete OED is organised on historical principles, that is; it not only tells you the current meaning of a word, but also previous meanings over 1,000 years of English usage illustrated by quotations. This means that the over six hundred thousand words now in the dictionary are complemented by in excess of three million quotations.

Although the first edition of the work was finally completed in 1928, work on it started much earlier and the decision to embark on the project actually goes back over seventy years before then to a meeting of the Philological Society of London in 1857. However nothing really happened after that, despite their resolution that existing English dictionaries were incomplete and not suitable for purpose. At the time the finest dictionary available for English had just passed its one hundredth birthday so it wasn’t unreasonable to see that A Dictionary of the English Language by Samuel Johnson was looking somewhat dated. That astonishing work by one man over seven years still ranks as one of the greatest single acts of scholarship and would remain the ultimate guide to the language for 173 years until the OED was completed by its large team of some two thousand compilers. Johnson himself defined dictionary compilers as follows:

Lexicographer: a writer of dictionaries; a harmless drudge that busies himself in tracing the original and detailing the signification of words

Actual work on the first edition of the OED didn’t start until 1879 when an arrangement had been reached with the Oxford University Press to publish and James Murray appointed as editor. The plan was to produce a four volume dictionary of some 6,400 pages and have it complete in ten years, this was to prove hopelessly optimistic. The dictionary was being written in alphabetical order so that the sections could be produced as they went along rather than waiting for completion but after five years the team had reached “Ant”, this was much more difficult than they had thought. In fact the first part of the dictionary did not see light of day until 1884 and ultimately by 1928, almost fifty years after starting, there would be 128 parts which were bound into ten volumes comprising 15,490 pages and over a quarter of a million entries. Unfortunately Murray died in 1915 so never saw his life’s work as a complete edition. The set was also very expensive, the cheapest binding cost 50 guineas (over £3,150 in today’s money) so it was definitely intended for institutions rather than members of the public. 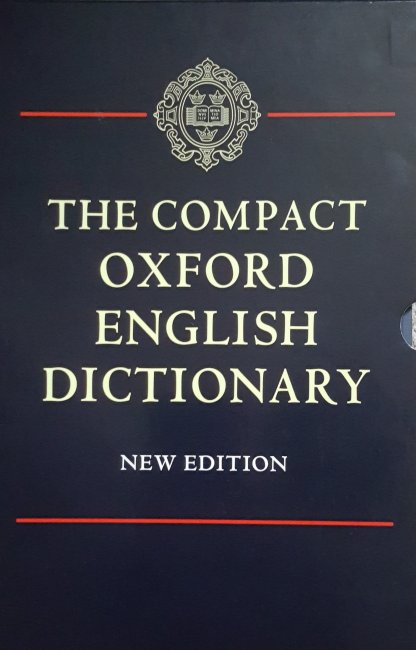 Completing the first edition was just the start, languages never stop evolving, especially English which is continually adding new words and meanings from across the world so the two remaining editors W.A. Craigie and C.T. Onions almost immediately started work on revisions for a second edition and also a supplement to keep the work up to date. By 1933 this supplement was produced and the original dictionary reset and reprinted in twelve volumes and there things stayed as far as printed editions were concerned until 1957 when it was decided to revise and expand the supplement. This became a four volume work in its own right, coming out between 1972 and 1986, but by then it had been decided to produce a second edition. This would merge not only the first edition with the supplements but include all the extra entries that had been compiled as the supplements were being published but which had missed their appropriate volume and whilst they were at it convert it to an electronic form for ease of future amendment. 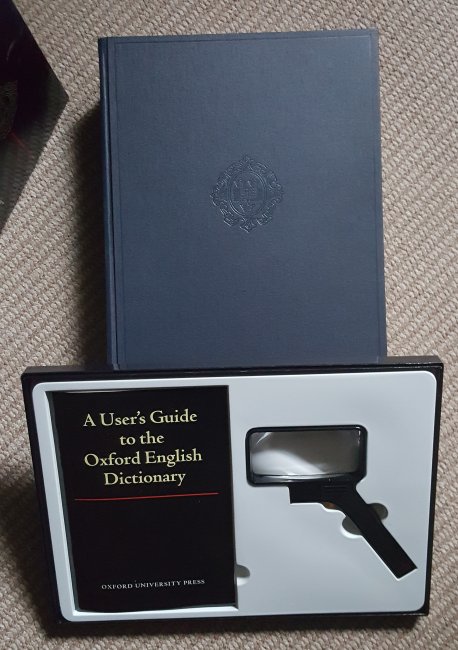 The second edition came out in 1989 and had grown to twenty volumes consisting of 21,730 pages with 291,500 entries and it is the ‘compact’ version of this edition that has illustrated this blog. This version, which I have had since it came out, reproduces all 21,730 pages as photo-reductions, nine to a page and is printed on very thin paper which allows for the 2,386 pages to be bound in one huge volume. It comes with a guide to using the dictionary, which also includes a very useful (at least for this essay) history of the publication and an absolutely essential magnifying glass with built in light so that you can actually read the text. Three volumes of ‘Additions’ came out in the 1990’s however not in ‘compact’ form, but in 2000 it was decided to abandon further updated print editions in favour of electronic updates and to move the dictionary online. The full twenty volume dictionary is still available in print for £845 or you can get the compact edition that I own for £400 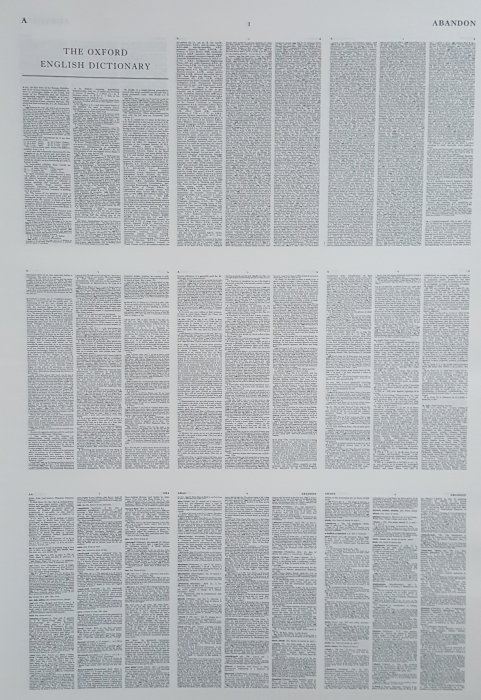 Although the third edition, should it ever achieve completion, will almost certainly never be sold as a printed edition as it is far more practical in the form it has now taken, the editors have already produced a preface which includes the following recognition that a lexicographers work is never done:

There are a number of myths about the Oxford English Dictionary, one of the most prevalent of which is that it includes every word, and every meaning of every word, which has ever formed part of the English language. Such an objective could never be fully achieved. The present revision gives the editors the opportunity to add many terms which have been overlooked in the past, but it should be understood that fully comprehensive coverage of all elements of the language is a chimera. That said, the content of the Dictionary is certainly comprehensive within reasonable bounds.

The second edition really was just the first edition with more entries (existing entries were not amended) however the work now being done on the third edition is going back and updating those early definitions, some of which haven’t changed since the 1880’s when the first part was published. This will bring the dictionary fully up to date and also deal with the difference in style for the first entries in the part of the alphabet to make everything consistent. Subscriptions to the online OED are normally £215 a year however for the 90th birthday celebration this has been cut to £90 for any subscription taken out before 31st March 2019. 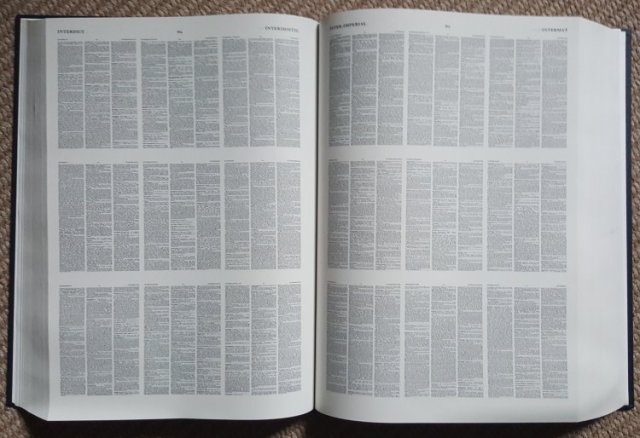 One of the fun things that can be done with new edition is free and I recommend signing up to the word of the day.  As I type this post it has come up with: 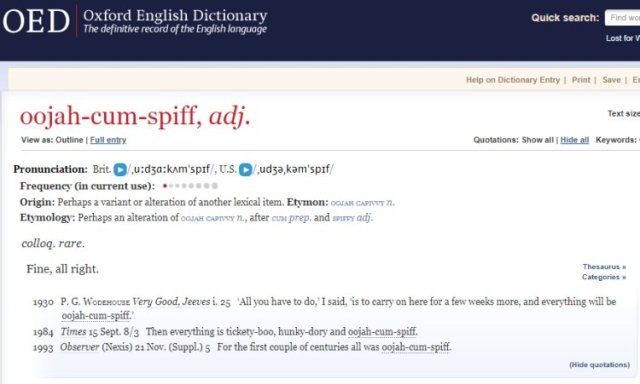 and I think that sums up the joy of the OED, yes for anyone interested in the English language everything really is oojah-cum-spiff.