Name a British novel written by one of the most celebrated authors of his generation, set (at least at the start) in 1984 where in the future Britain has an government headed by a powerful single ruler telling his populace what to do. No I don’t mean Orwell and his apocalyptic volume written in 1948 and published June 1949, this one was written and published in 1904, was admired by Orwell and one, quite likely, theory for Orwell choosing 1984 as the year of his book was that Chesterton had also used that year for his stab at futurology forty four years earlier. 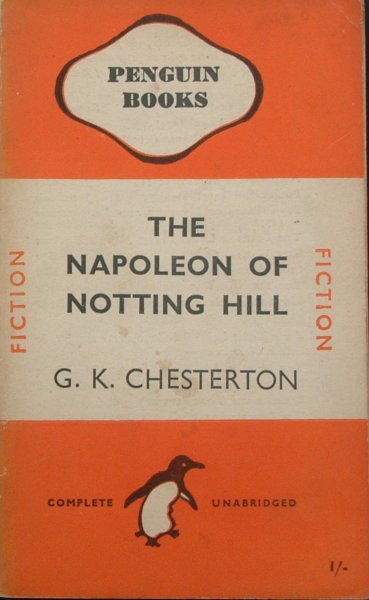 Sadly Chesterton’s brilliant work is now largely unread, unlike Orwell’s more famous book set in the same year. My copy is the Penguin Books first edition and was printed in 1946, before Orwell even started his most famous and final book. But enough about Orwell, this is about G K Chesterton’s first novel, he wrote some poetry and biographies with other people before this from 1900 but this was his first work of significance and what a way to start. The premise of the book is spelled out by Barker, one of the three civil servants that we encounter at the beginning of the book, right at the start whilst he is trying to explain how this future England is governed to of all the people the deposed President of Nicaragua who unexpectedly comes walking down the street.

We have established now in England, the thing towards which all systems have dimly groped, the dull popular despotism without illusions. We want one man at the head of our State, not because he is brilliant or virtuous, but because he is one man and not a chattering crowd. To avoid the possible chance of hereditary diseases or such things, we have abandoned hereditary monarchy. The King of England is chosen like a juryman upon an official rotation list. Beyond that the whole system is quietly despotic, and we have not found it raise a murmur.

The ex-President raises the obvious objections regarding the possible sanity of such a person if there are no checks and balances but these are over-ruled by the three Englishmen he is talking to, all of which will be significant in the unfolding tale. One of which is, if not actually mad, possessed of a very odd sense of humour which I had been struggling with up to this point; it turns out that Chesterton is simply trying to illustrate how odd Mr. Auberon Quin actually is. After leaving the restaurant where they had entertained the ex-President, Quin becomes more and more eccentric in his behaviour until they are approached by two policemen.

Two grave-looking men in quiet uniforms came up the hill towards them. One held a paper in his hand.

“There he is, officer,” said Lambert, cheerfully; “we ain’t responsible for him.”

The officer looked at the capering Mr. Quin with a quiet eye.

“We have not come, gentlemen,” he said, “about what I think you are alluding to. We have come from head-quarters to announce the selection of His Majesty the King. It is the rule, inherited from the old régime, that the news should be brought to the new Sovereign immediately, wherever he is; so we have followed you across Kensington Gardens.”

Barker’s eyes were blazing in his pale face. He was consumed with ambition throughout his life. With a certain dull magnanimity of the intellect he had really believed in the chance method of selecting despots. But this sudden suggestion, that the selection might have fallen upon him, unnerved him with pleasure.

“Which of us,” he began, and the respectful official interrupted him.

“Not you, sir, I am sorry to say. If I may be permitted to say so, we know your services to the Government, and should be very thankful if it were. The choice has fallen….”

“God bless my soul!” said Lambert, jumping back two paces. “Not me. Don’t say I’m autocrat of all the Russias.”

“No, sir,” said the officer, with a slight cough and a glance towards Auberon, who was at that moment putting his head between his legs and making a noise like a cow; “the gentleman whom we have to congratulate seems at the moment—er—er—occupied.”

“Not Quin!” shrieked Barker, rushing up to him; “it can’t be. Auberon, for God’s sake pull yourself together. You’ve been made King!”

And so the catastrophe that will be the reign of King Auberon begins. As you can see this is a very different work to Orwell, full of humour but nevertheless there will be tragedy, warfare and death and also poignancy as each featured character gets swept up in the madness which becomes normality before finally it all collapses thirty five years after the start of the novel in 2019. So what is it that the new King does that causes such upheaval? Well for reasons unknown in the early stages of the book he decides to re-introduce the medieval concept of City States but these are not the cities of London, Manchester, Birmingham etc. no he is far too parochial for that, the book is set entirely in London and he creates City States out of the individual boroughs. Now most modern cities (apart from those artificially created such as Brasilia) are a conglomeration of small towns and villages that gradually became swamped by the city itself and became the merely districts. King Auberon pits each of these against the other along with fanciful histories that he creates for them explaining their names and releases “The Great Proclamation of the Charter of the Free Cities” which will force each borough to effectively step back to medieval times not just in their dealings with himself and the other boroughs but with costumes and banners also designed by the King and militias armed with halberds and swords.

The King was happy all that morning with his cardboard and his paint-box. He was engaged in designing the uniforms and coats-of-arms for the various municipalities of London. They gave him deep and no inconsiderable thought. He felt the responsibility.

“I cannot think,” he said, “why people should think the names of places in the country more poetical than those in London. Shallow romanticists go away in trains and stop in places called Hugmy-in-the-Hole, or Bumps-on-the-Puddle. And all the time they could, if they liked, go and live at a place with the dim, divine name of St. John’s Wood. I have never been to St. John’s Wood. I dare not. I should be afraid of the innumerable night of fir trees, afraid to come upon a blood-red cup and the beating of the wings of the Eagle. But all these things can be imagined by remaining reverently in the Harrow train.”

And he thoughtfully retouched his design for the head-dress of the halberdier of St. John’s Wood, a design in black and red, compounded of a pine tree and the plumage of an eagle. Then he turned to another card. “Let us think of milder matters,” he said. “Lavender Hill! Could any of your glebes and combes and all the rest of it produce so fragrant an idea? Think of a mountain of lavender lifting itself in purple poignancy into the silver skies and filling men’s nostrils with a new breath of life—a purple hill of incense. It is true that upon my few excursions of discovery on a halfpenny tram I have failed to hit the precise spot. But it must be there; some poet called it by its name. There is at least warrant enough for the solemn purple plumes (following the botanical formation of lavender) which I have required people to wear in the neighbourhood of Clapham Junction. It is so everywhere, after all. I have never been actually to Southfields, but I suppose a scheme of lemons and olives represent their austral instincts. I have never visited Parson’s Green, or seen either the Green or the Parson, but surely the pale-green shovel-hats I have designed must be more or less in the spirit. I must work in the dark and let my instincts guide me. The great love I bear to my people will certainly save me from distressing their noble spirit or violating their great traditions.”

All these places are of course within the boundaries of London so no more than a few miles apart and as for forests of fir in St. John’s Wood there probably hasn’t been any forests there since Roman times. The genius of the book is maintaining this ridiculous analogy in all seriousness as it also becomes clear that the King has not done this in madness but simply a a great joke to keep himself amused. And all is strange but well in the land until there rises, ten years later, as Provost of Notting Hill a man who is truly mad in his own singular way and believes totally in the scheme as the only true way for the anywhere to be governed and is prepared to fight to maintain his Notting Hill in all his supposed glory.

This is where the book darkens considerably for there is war to be fought as the surrounding City States of West Kensington, South Kensington, Bayswater etc. are forced into various conflicts with the fiercely independent Adam West, Provost of Notting Hill. It is also where my review will end. To reveal more would give away the book and you do really need to read it. I hope that the extracts I have included will encourage you to do so. Say G K Chesterton to somebody nowadays and if they have heard of him at all it will be the Father Brown detective stories, but there are over eighty books, hundreds of poems, a couple of hundreds short stories and an astonishing more than four thousand essays. He is one of the most prolific writers of all times and to be largely known by the fifty three short stories that make up the Father Brown canon is a great disservice to his legacy.

You can read The Napoleon of Notting Hill on Project Gutenburg here as it seems to have been out of print for quite some time so tracking down a printed copy will need some searching.

One thought on “The Napoleon of Notting Hill – G K Chesterton”