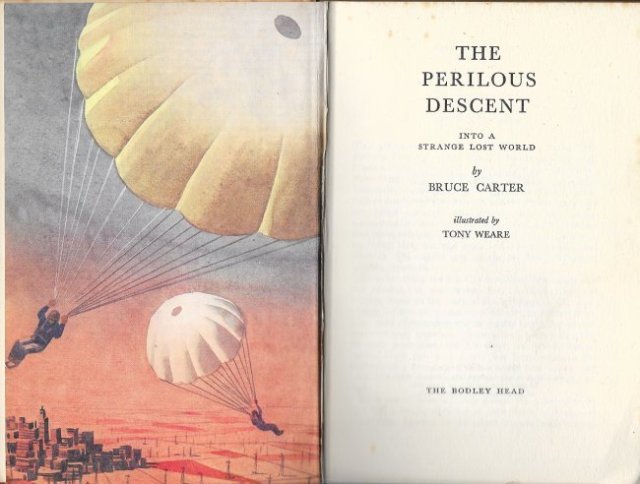 I probably first read this book about forty years ago when I was the age it is most likely aimed at, what would now be classed as Young Adult by the publishing world, and I doubt I have read it since although the copy I have is still the one I had back then. I had no real interest in books as objects back then so never noticed that it is the first edition printed by The Bodley Head in 1952. The dust wrapper is missing, assuming I ever had one, which I doubt as I would have been careful with it even then and I would have bought the book from a second hand bookseller sometime in the mid to late 1970’s. I do know however that the picture on the wrapper was the same as the frontispiece reproduced above, with the title on the larger parachute and Bruce Carter on the smaller one.

Bruce Carter is the pseudonym of Richard Hough, which he used for the half dozen children’s books he wrote, with more than a hundred more titles in his own name which were mainly regarding ships or wartime escapades although he also wrote a few biographies. In 1952 he was working for The Bodley Head, hence his choice of publisher, and in the 1960’s he moved to Hamish Hamilton where he ultimately rose to the position of Managing Director of the children’s book division, Hamish Hamilton also published this book amongst others by him whilst he worked for them.

The Perilous Descent is a rollicking Boy’s Own adventure story apparently written in alternate chapters by the two Typhoon pilots Danny Black and Johnny Wild who were shot down at the start of the book on their way back to England ultimately ending up on a sand bar about a mile off the Dutch coast sometime in 1944. Hough was himself a Typhoon pilot in the war and had to make a forced landing after being hit during which he badly broke his leg which never properly healed although he lived until 1999. This first hand knowledge as to what the two protagonists would have with them regarding survival aids and how they could use the equipment they had certainly adds to the tale as they try to eke out their meagre rations after falling down a hole on the sand bar and into some mysterious tunnels. Ultimately the only way forward is down a huge cavern but fortunately they still have their parachutes so that is what is depicted in the frontispiece as they drop over 25,000 feet to the unknown world below.

The land and people they encounter far below the Earth are a strange mix of sixteenth century language, clothes and armaments along with futuristic cities and transport as can be seen in the image above, it is also not a friendly welcome. It turns out that a rebellion had recently occurred and they had been mistaken for some of the rebels, they soon manage to convince the Governor that they are nothing to do with the insurrection and are enlisted to take part in a surprise attack on the rebel stronghold. The story races along and I found myself reading longer sections in one go than I intended to and the denouement, which is foreshadowed in the introduction, has a nice twist right at the end.

The book appears to be no longer in print and I suspect that the Puffin Books edition that came out initially in 1958 and was still being reprinted up until at least 1977 was the last available publication. Children’s books related to the war fell out of fashion around then and although I have greatly enjoyed this nostalgic read I doubt the book would be a commercially viable publication nowadays.