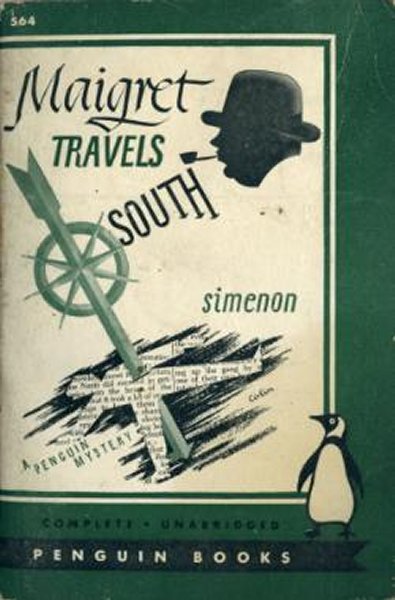 This book arrived in the post yesterday having taken almost fifty days to get here from the USA and it occurred to me that I have never actually read anything by Simenon. I wanted it as this is the first edition of the first Maigret book published by Penguin and came from the New York operation set up by Allen Lane and Ian Ballantine during WWII when transatlantic exports were not possible.  It was published in September 1945 whilst the UK parent company didn’t get to Maigret until January 1950 and this title would eventually appear in the UK in January 1952 printed along with nine others as part of the Simenon Million (10 books each in an edition of 100,000 published simultaneously).

Simenon’s novels are quite short so Penguin, along with other publishers, have normally put two together in one volume and this contains ‘Liberty Bar’ along with ‘The Madman of Bergerac’ and even then the book is only 250 pages. Both stories were translated by Geoffrey Sainsbury who translated several of the early Maigret novels printed by Penguin. As they are separate novels only linked by Maigret not being in his regular Paris haunts but much further south I will review them separately.

The seventeenth Maigret novel sees the great detective sent off on a murder investigation which apparently requires great tact, something he keeps repeating to himself whenever he gets frustrated by the progress of the case. It’s set in Cannes and Antibes and you can tell straight away that Maigret is not comfortable here. He makes no concession to the location wearing his black coat and bowler hat regardless of the heat and so dramatically stands out where presumably in Paris he would be much like anyone else in the capital. William Brown has been murdered is another mantra he keeps repeating, but his first problem is who was William Brown? Because without understanding that there is no way to work out what had actually happened and why.

My first surprise was nothing to do with the plot but how much alcohol is consumed right from Maigret’s arrival and introduction to the local detective whom immediately suggests going to a bar. Every time we see Boutigues he is either drinking or about to open a bottle and Maigret gets through plenty in his own right especially when he finds Liberty Bar. The characters we are introduced to are wonderfully drawn by Simenon, the four women in particular, the mistress, her mother, the alcoholic bar owner and the prostitute and the time when they finally meet at the funeral, which is engineered by Maigret whist he claims to not know anything about it, is poignant but also funny as they manoeuvre for precedence.

Right up until almost the end I had no idea who had done it and you are cleverly pointed into various dead end possible solutions. My first Maigret story was an absolute delight.

To my surprise the next novel included in this book was written earlier, being number fifteen in the Maigret series, but just emphasised that you really can read any of the seventy five novels plus numerous short stories pretty well in any order. If anything it was also a better story with Maigret solving the murders and the mysterious past of some of the most important characters in Bergerac all from his bed after being shot. I’m not really giving anything away here as that happens very early on in the novel and provides a reason for the Inspector not being able to see for himself what is going on but having to piece everything together from conversations in his room at the hotel where he goes to convalesce.  This plot device is fascinating as Simenon tells the reader Maigret’s thought processes as he slowly unravels the tangled web of lies and half truths surrounding the people he suspects.

The novel starts with Maigret having to go to Bordeaux just to tidy up some loose ends on another case and he takes the overnight train. However the upper bunk of the couchette he ends up in is occupied by a restless man whom in the middle of the night sits up, nervously pulls his patent leather boots over knitted grey wool socks, climbs down the ladder, slips out of the compartment leaving the door open and after waiting for the train to slow down jumps from the carriage. This wait had alerted Maigret as he hadn’t closed the door behind him so he saw him about to jump and got up and followed him being shot by the stranger when he realised he was being pursued.

Who was the mysterious man in grey socks? Why did he jump from the train? And is he anything to do with the murders of women who are strangled and then a long needle inserted in their hearts that has so rattled the town of Bergerac? All this Maigret solves from his bed in one of the best murder mysteries I have read for a long time.

One thing is certain I need to read more Maigret.