In 1997 I was in Iran and in the Tehran museum saw fabulous hand painted pages from the great classics of Persian literature some of which were 1000 years old, so were contemporary with the great early medieval illuminated manuscripts produced by the monks in Western Europe that I was already familiar with. However these pages were on a different level being more miniature paintings surrounded by text rather than marginal images, a complete book would be a wonder of any age but few have survived intact.

The great epic poem Shahnameh by Ferdosi (also Ferdowsi, Firdusi etc. Persian to English isn’t a precise transliteration) was one of the stars of the exhibition with several wonderful pages on display and at over 100,000 lines it is the longest poem ever written by one author. Written and revised between 997 and 1010AD the 1000 year old poem tells the tale of Persia from a mythological start and the creation of the world, through a time of legendary heroes to historical accounts up to around 750AD and the fall of the Sassanid rulers of Persia. Despite the age of the text it is still perfectly readable to modern Iranians whereas Geoffrey Chaucer (who lived roughly 400 years later) is about as far back in English that you can go and  have a reasonable chance of being able to understand the meaning. Regrettably I don’t read Persian so the text is beyond me but the illustrations made me yearn for a copy for myself. So along with a couple of rugs my souvenirs of Iran included a book in tribute to this great work and the ancient illustrations that so fascinated me on first seeing them. 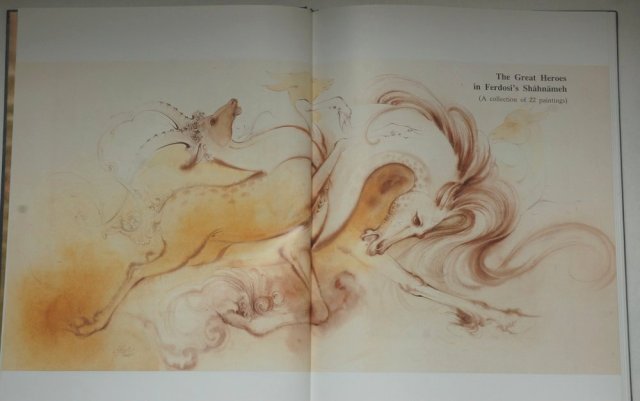 The book was printed in 1991 and describes itself as a commemoration of the millennium of composing Shahnameh by Ferdosi. It was a few years early but the 1000 years have now passed and I’m glad it was early or I may not have been able to obtain this lovely, if somewhat large (42cm x 30cm), volume. The basic premise of the book is that 22 paintings by Mahmoud Farshchian done in the old style of Persian miniature art that I so admired would be used to illustrate sections from the heroic phase of the poem, it is written mainly in Persian with some English to explain the paintings.  The introductory pages are truly beautiful 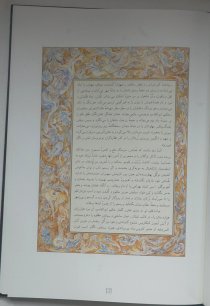 and then we get into the main work which is the 22 modern interpretations of pages from the ancient works, I love the way that the pictures reach out beyond the frame. Click on the pictures to access full screen versions. 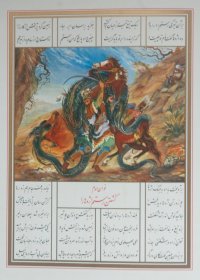 I have chosen 5 pages from the book to illustrate it and these are:

Ferdosi is not by any means the most famous of the Persian poets, that honour probably goes to Hafez and the annual Hafez festival was on when I arrived in his birthplace of Shiraz. He lived from 1315 to 1390 and like Ferdosi his name is more of an honorific, the difference is that we don’t know the real name of Ferdosi but Hafez was Khwāja Shams-ud-Dīn Muḥammad. Being called Hafez indicates somebody who has memorised the Koran, which apparently he did at a remarkably early age and that is the name with which he has gone down in posterity. Also on my bookshelves is the programme for the event. 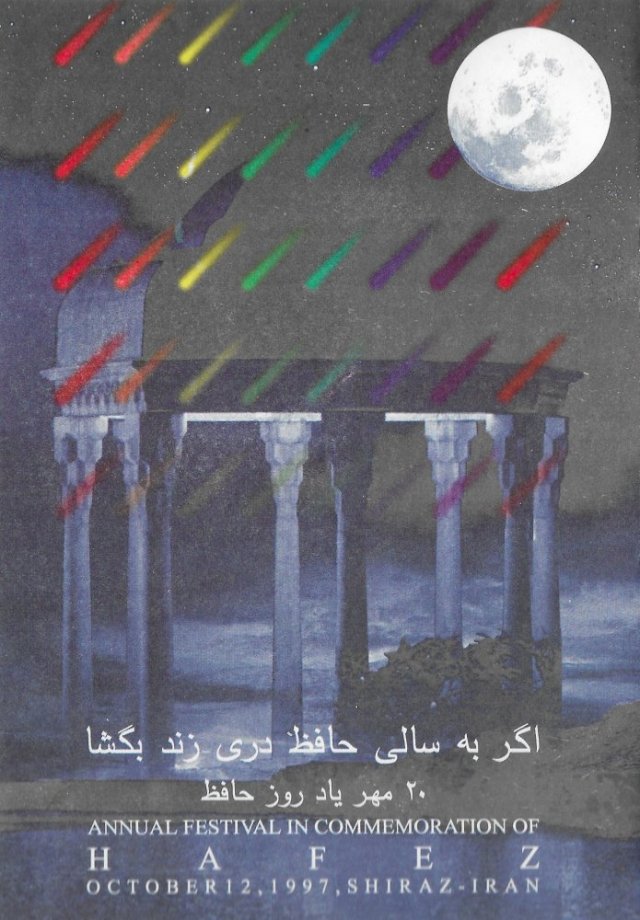 and I took several photographs at his mausoleum which is where recitals and singing of his poems were taking place. He is a much loved poet in Iran which is odd when you consider that most of his poems involve wine, love or the beauty of women; hardly the subjects that are approved of in conservative Iran. 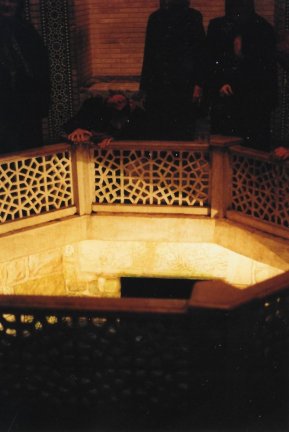 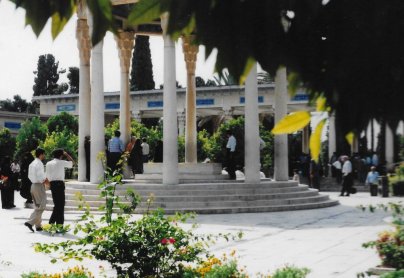 There are fortunately several good English translations including Penguin paperbacks of Hafez’s works, and now Ferdosi has also been included in Penguin Classics so let us leave this blog post with some words by Hafez from The Penguin Little Black Classic “The nightingales are drunk”

With wine beside a gently flowing brook – this is best;

Withdrawn from sorrow in some quiet nook – this is best;

Bright laughing lips, a friendly fresh-faced look – this is best.

One thought on “Persian Poets”