Mention the words First Folio to most book collectors and their initial thought will go to the first collection of Shakespeare’s plays printed in 1623; and indeed I will come to that in a later blog as I have a copy of the Norton facsimile. Hence this essay being entitled First Folio: 1, the facsimile will be covered in First Folio: 2 in a few weeks time.

So what is this one about then? Well in 1946 after being demobbed from WWII Charles Ede was looking for a way to make a hobby into a career. He had discovered the beauty of the pre war private presses whilst still a schoolboy, publishers such as William Morris and the Kelmscott Press. During the war he had started a collection of Kelmscott, Nonesuch and Golden Cockerel Press fine editions but these really were the preserve of the book buyer with a significant disposable income and well beyond the means of most people. What he had spotted was what he believed was a gap in the market, even if his friend, Christopher Sandford, then running The Golden Cockerel Press thought the gap was too small for anyone to make a business from it. What if somebody could print fine editions of books but at a price that more people could afford? In a quote I particularly love as it ties my two largest book collections together Sandford said

But life is full of wonders, and people like you do get away with things – like Lane and his Penguins – so thumbs up.

So Ede went for training at the London College of Printing and by October of the next year The Folio Society was born.

The first title was a collection of short stories by Tolstoy, my copy has some damage to the dust jacket where somebody has clearly put a cup down on it but as you don’t often come by Folio’s first book with dust jacket I added it to my collection nevertheless. The tales included are:

The idea was that books would be published at the rate of one a month and sold through standard booksellers, neither of which turned out to be the case. The first few titles did get sold that way but the retailers weren’t really interested in a new small publishing venture, so building on the idea of the Society part of the name Charles Ede by the end of 1947 decided to turn it into a club and sell only to members which added to the exclusive aspect of the books. 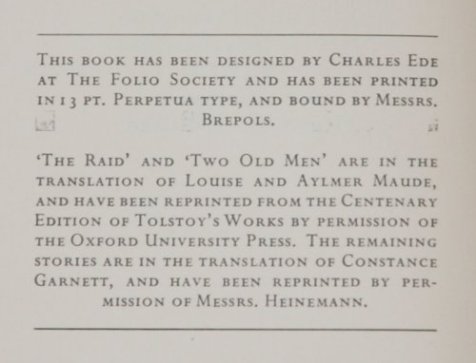 The first few years were hard and the Society survived by doing other things beyond the original plan such as private editions and selling manuscript pages along with fine art prints but slowly the subscriber base grew especially when the concept of a free presentation volume for members who agreed to purchase a minimum number of books each year was introduced in 1950.

To be frank part of the problem with the early years was that because of the ongoing paper rationing and the quality of what was available the first few books are not as good as Ede wanted, this is particularly clear with Tales by Tolstoy which was printed in Belgium to get round the shortage of paper but the actual printing as Ede himself noted in 1968 in the first Folio bibliography ‘Folio 21’

The printers, who only undertook the job as a favour, were not used to this type of work and the standard leaves a good deal to be desired.

and as the above illustration from Three Deaths illustrates it really isn’t that good, the picture appears to be over-inked and lacks the lightness of touch that a line-blocked pen and ink sketch would have in later years. The paper also feels rough and not what you would expect from a fine edition.

The Folio Society did however manage to get out a total of three books in 1947 so the equivalent of one per month, something they were not to manage regularly until 1955 with 13 volumes and have never dropped below 12 in a year since then. The second was Trilby by George du Maurier which also became the first book from the society to be illustrated by the author, something that is still a rarity today. 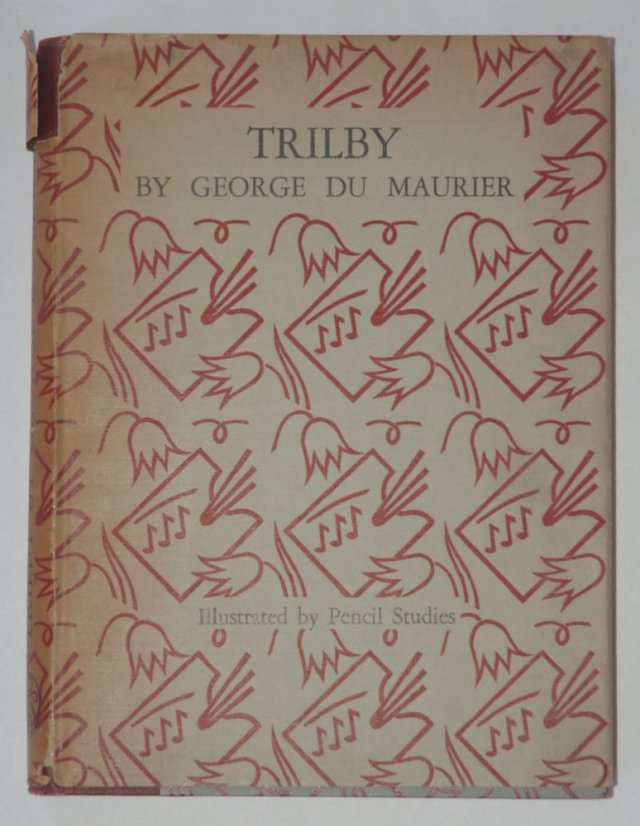 This book was much better quality than the Tolstoy edition, although also printed by Brepols in Belgium, and contains a 5 page appendix which prints for the first time in book form a section of the book which clearly describes the painter James Whistler and was presumably left out of earlier editions for legal reasons. The drawings by du Maurier are reproduced very well, this one is entitled ‘the soft eyes’ 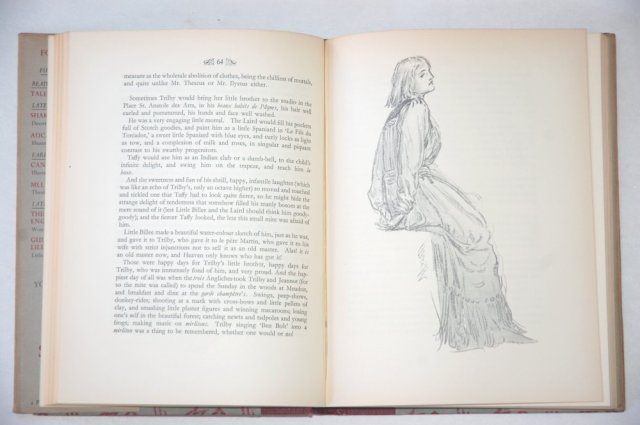 The first Folio Society book to be printed in the UK was book number 3 Aucassin & Nicolette, translated from Old French by F.W. Bourdillon and this was a real oddity. The first two books were traditional editions in paper dust jackets, this is a lot smaller at 8.9 x 5.8 inches (226 x 148 mm) and the jacket is transparent plastic printed in black with the title and illustrator information. 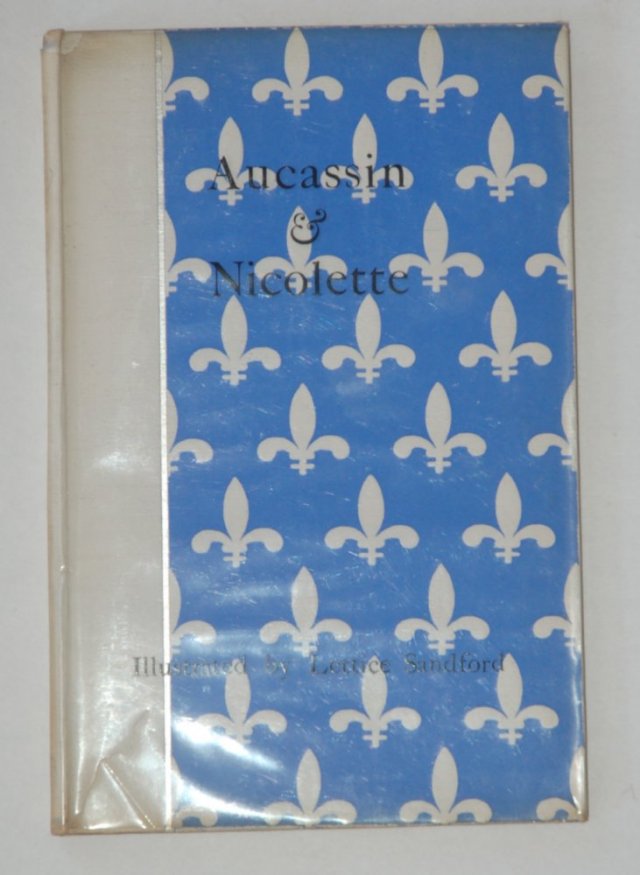 The plastic wrapper has often got lost over the years or the text rubbed off, mine is in very good condition, the poor appearance in the photograph is due to glare off the plastic. The black print on the slippery plastic continues on the inside of the wrapper and again is prone to damage.

The title page gives a feeling of the book which is my favourite of the first three and gives the first real hint of Folio as a fine press publisher, at 10s 6d it cost the equivalent of just over £20 today which for a 60 page book is quite a lot but it is a lovely edition. The printer was the Chiswick Press who would go on to print many editions for Folio.

What is noticeable to those people familiar with the production of the Folio Society today is that books all have dust jackets, the familiar slip cases did not become standard until 1959 although they had started to appear in 1956 and dust jackets were still used throughout the 1960’s although mainly for the subscribers presentation volume.

These three books in my collection are all first editions in Folio, in fact none of them were ever reprinted, the first book to make it to a second impression was Shakespeare’s Sonnets, originally printed in 1948 and reprinted 3 times in the next 42 years before being replaced by a completely new edition.

Last year the society reached it’s 70th birthday and a couple of years before that finally abandoned the membership concept that served it so well along with the idea of a free presentation volume other than the occasional diary or notebook to encourage buyers to spend more. Nowadays the website is open to everyone and you can just have one book if that is all you require. At the last count I have over 425 Folio books and still happily add more each year, the only years where I don’t own at least one example of that years publications are 1967 and 2006, so beware the Folio Society is definitely addictive…

One thought on “First Folio: 1”