Until the advent of print on demand publications in the last decade or so the diary of Edward Burghall, vicar of Acton in south Cheshire was one of the most difficult to source of all local history accounts for that county. This was a pity as he was an eye witness to the progress of the English Civil War (1642-51) and his diary covers this entire period and once the style settles down it provides a real feel of how the county and its population was affected by the conflict.

The diary first appeared in print as an adjunct to the Chester edition of King’s Vale Royal of England by William Smith and William Webb, published by Daniel King in 1656, this book is now extremely rare and supplements like this are even rarer as they were not issued at the time but were additional extras that the publishers came up with as they found them. It was included in the combination volume of the relevant section of King’s Vale Royal with Sir Peter Leycester’s Antiquities of Cheshire published in two volumes by John Poole of Chester in 1778. The next time it is known to have been reprinted is as part of Cheshire Biographies by Barlow, printed in 1855 which is also a very difficult book to locate. After that we have to leap all the way to 1993 when it was printed for the first time as a separate book by The Tern Press of Macclesfield as a limited edition of just 200 under the title of Providence Improved and that is the copy on my bookshelves. 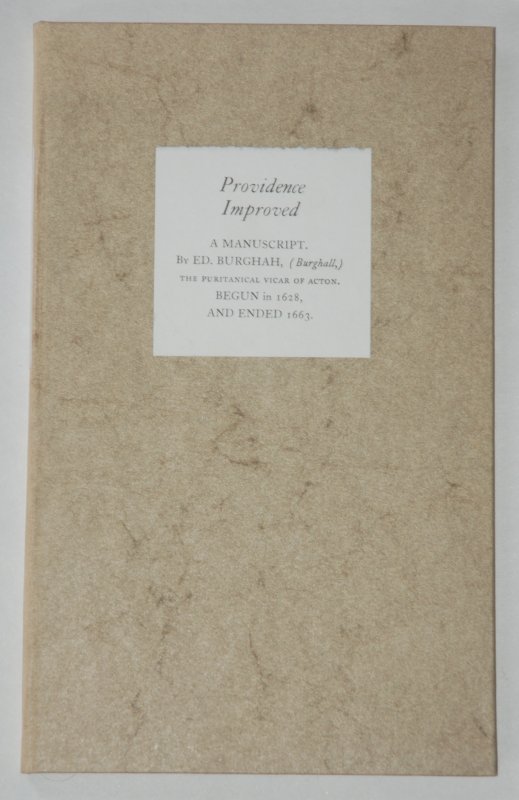 As mentioned above Edward Burghall was vicar of Acton, a small village about a mile from the ancient market town of Nantwich which dominated the otherwise mainly rural surroundings in south Cheshire. Nantwich was for Parliament in the war against the Royalists so the diary does tend to cover the conflict from that side. The diary whenever it has been printed has included extracts from various years before the war which as well as illustrating the style of the diary at that time which was more of a series of notes rather than the  extended essays it became during the war also give an idea of Burghall’s belief that god shall strike down the unrighteous, there are very few examples of the righteous being blessed by god however. 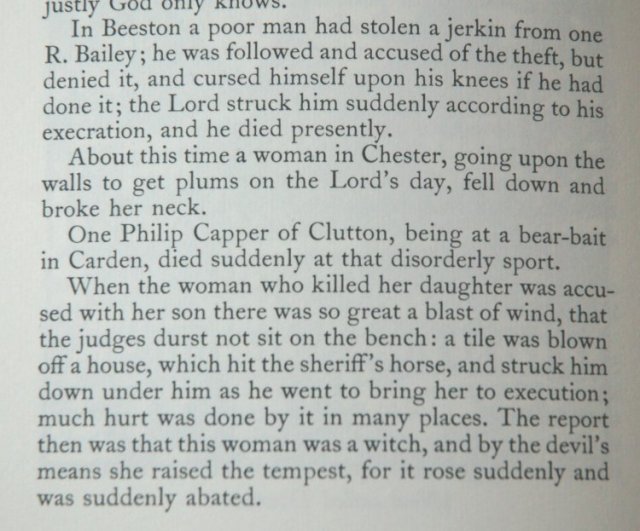 Interesting as these are is showing the beliefs and attitudes of the people at the time the diary really gets into it’s stride with the origins of the war and descriptions of military actions. Here Burghall proves to be a faithful witness of manoeuvres either seen by himself or reported by people involved in the local area and especially in the lead up to the siege of Nantwich and it’s aftermath in January 1644.

This page from May 1643 also includes a drawing by Nicholas Parry of the Crown Hotel which still looks pretty much the same now as it did then. 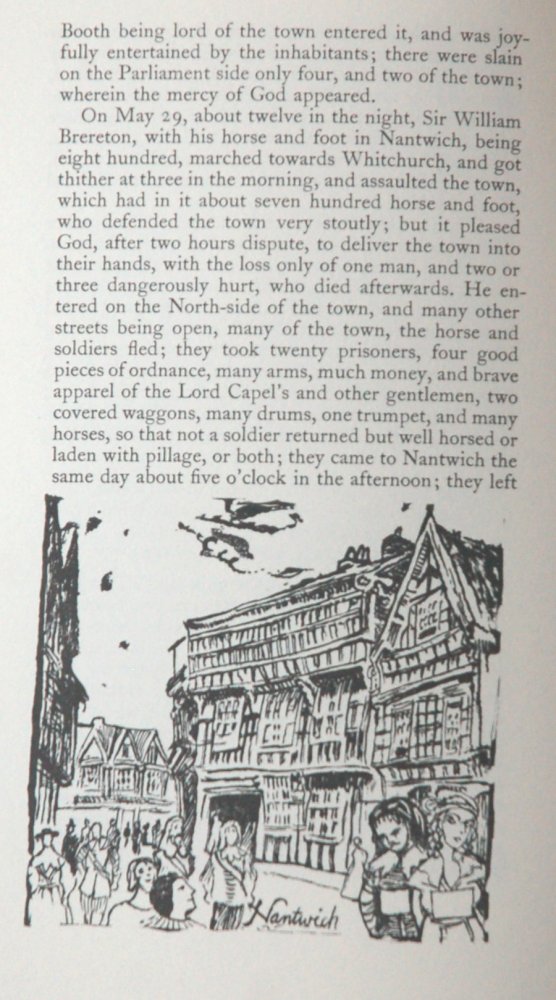 Whitchurch is 14 miles (22½ km) from Nantwich so the soldiers starting at midnight marched 14 miles in 3 hours, fought a battle, won it, gained some booty from the defeated army and march 14 miles back again returning by 5 in the afternoon. Quite a days work! This isn’t the only example of similar there and back again in a day raids run out of Nantwich that are recorded in the diary; on another day they went to Chester, fought in a battle and got back a round trip of 41 miles (66 km)

By the end of 1643, as can be seen above, the Royalists were clearly getting fed up about the way the troops from Nantwich were able to so disrupt their positions that it was decided to move against the town itself.  By then Nantwich was the only town still under Parliamentary control in the entire county so it was definitely becoming a nuisance and  skirmishes started in October that would eventually lead to the Battle of Nantwich on 25th January 1644. 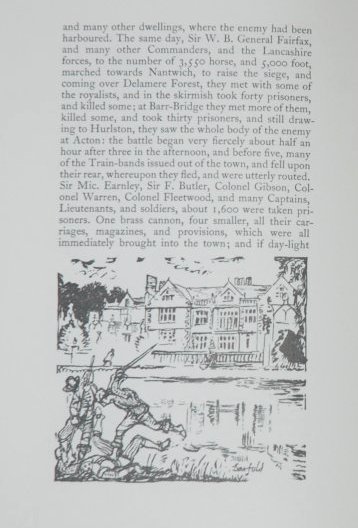 The battle is still commemorated in the town each year and since the 1970’s there has been a re-enactment and other entertainments suitable to the period on the Saturday closest to the 25th January and is known as Holly Holy day as back in January 1644 the townspeople wore sprigs of holly in their hats to celebrate the victory there being no other colourful plants at that time of year. I was born in Nantwich and lived there throughout my childhood which is why wanted this book so much when it came out. As I said at the beginning of this blog nowadays it is easy to get the text from more than one print on demand source both here and in America, it is always found with Memorials of the civil war in Cheshire and the adjacent counties by Thomas Malbon, of Nantwich as both books are quite short and it makes for an interesting read.

Another aspect of this book that I want to cover is how this edition came to be printed. Crowd-funding is seen by many as a modern phenomenon, sites such as KickStarter and GoFundMe are in common use now however the book business has used this model for centuries with subscribers editions and selling books against a prospectus. Printing a book was an expensive game, and still is if you want an object of quality, so subscribers would be sought to put up money in advance to ensure that the massive initial outlay was at least mainly offset before the publisher went to press. Subscribers would get the earliest editions and often their name printed in the back, also their edition may be on larger paper or have extra illustrations to make it stand out. The alternative would be a prospectus, a simple sheet of paper produced to interest buyers before publication and again persuade them to pay before the physical book exists, usually by getting a discount on the final published price. That was how Tern Press went about selling this book as can be seen below as I kept my copy of the prospectus and tucked it inside the book when I had it. 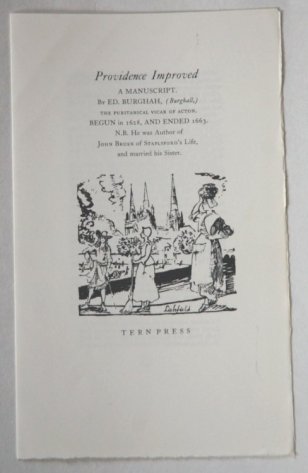 The specials were a lot more expensive (from memory about £200) but for that you got an original watercolour by the artist tipped into the book and you could choose what you wanted him to paint. I however couldn’t afford that so handed over my £48 in advance of publication and eventually received number 31 in the post.

You don’t have to be from Nantwich, or even be interested in Cheshire history to find the book interesting. Burghall eventually lost his position at Acton on the 3rd October 1663, as a fervent Parliamentarian he was always at risk after the restoration of the monarchy in May 1660, and he died in apparent poverty on the 8th December 1665.