Well actually The World as it was, as these books date from 1884 and provides a glimpse into history 130 years ago. However before looking at the book itself the main reason for selecting it is to expand on the subject of subscribers editions that I first touched on in Burghall’s Diary  That book in my collection was sold against a prospectus, ‘The World As It Is’ is a subscribers only book and helpfully whoever had the parts subsequently bound included the subscription page so we know how it was sold. After a lot of description as to the structure of the proposed two volumes the subscription page concludes as follows:

The Work will be handsomely printed on super-royal 8vo paper, and will be illustrated by above 300 engravings printed in the text; seventeen maps and diagrams printed in colours, ten coloured plates show some of the principal races of the earth and some remarkable natural phenomenons, and twenty-eight separate page engravings representing notable and remarkable localities in many lands. – making in all FIFTY-FIVE separately printed illustrations. It will be issued in Fourteen Parts, of 80 pages of letterpress, at 2s. each, or Seven Divisions in stiff paper covers at 4s. each, forming when completed two handsome large 8vo volumes. Whether viewed in the aspect of the wide range of its contents, of its educative value, its wealth of illustration, or its moderate price, this work will be found to be quite unique of its kind.

Capitalisation is as printed in the document, I have used bold to represent the parts highlighted in italics in the original, this is a Victorian marketing department going full tilt. For those not familiar with the abbreviations used 8vo is a standard paper size usually written as octavo. Standard octavo paper is 9 inches high by 6 inches wide (23cm x 15cm) The pages of the book are actually 9.7 inches high by 7.2 inches wide (24.6cm x 18.4cm) which is presumably where Blackie have come up with super-royal although both super octavo and royal octavo are larger than this.

The price is given as either 14 lots of 2s. or 7 lots of 4s. s. standing for shilling so a total of 28 shillings regardless of how you had the parts. Using the Bank of England inflation calculator (which unfortunately only goes up to 2016) this ‘moderate price’ was apparently more like £159.65 in 2016 or just over £168 by 2018 adding the extra 2 years inflation. Also bear in mind that like modern magazine part works you then need binders, in fact back then you definitely did as these were literally just loose pages, especially the illustrations, and came with instructions for the bookbinder as to where the pages should go. So you would buy the remarkably solid board covers available from Blackie and then pay a bookbinder to put it all together meaning you wouldn’t see any change out of the equivalent of at least £200 probably closer to £250 for your ‘moderate’ purchase. I bought the books in the mid 1980’s and according to the price still visible inside paid £2.50 for the pair at the time, the paint stains on the boards no doubt keeping the price well down. I remember the second hand bookshop where I bought them fondly, the proprietor wrote a year code letter next to the price in all his books, A for his first year of business, B for the second etc. he had been trading for getting on for 20 years by the time I bought this and if you could find anything in the shop coded A you could have it for free.

The books are really interesting although anyone looking at them and deciding to visit a place based on the information provided would definitely have a surprise coming; for example Swanston Street in Melbourne certainly looks different nowadays :

It’s the illustrations that I like so much and that first attracted me to these books, that and odd bits of history that you suddenly spot whilst scanning through. The United States of America is described  as a republic consisting of 38 states and 8 territories with an organised government, besides the Indian territory, the territory of Alaska and the District of Columbia. Seeing a map with Indian Territory clearly marked instead of Oklahoma emphasise the fact that the books pre-date the ‘land runs’ of settlers into the Indian lands and are a full 23 years before the Indian Territory ceased to exist altogether when the state was created in 1907.

The smaller illustrations within the text are also beautiful steel engravings as these two pages show, one from the Amazon basin in Brazil and the other from the Transleithan Provinces of the Austrian Empire most of which is now the independent country of Hungary with the Transylvanian region making  up the western part of Romania. You do have to know some history to even start looking places up as they may well not be under the country you expect.

Budapest is described throughout this section as two cities Buda and Pesth (the extra h is how it is spelt in the book) and when you are there the city does feel like two distinct places even now.

The colour plates are not a strong point though, the artist who did these wasn’t really of the standard of the rest so they are a bit of a let down even though the colours are still strong, the best one by a long way is the one representing China:

The books provide a glimpse into a world that no longer exists and for that they are fascinating. In fact they document a world that was rapidly disappearing even as it was published, so I think I will conclude this essay with what is apparently a typical Dutch interior, but is definitely is a museum piece now. 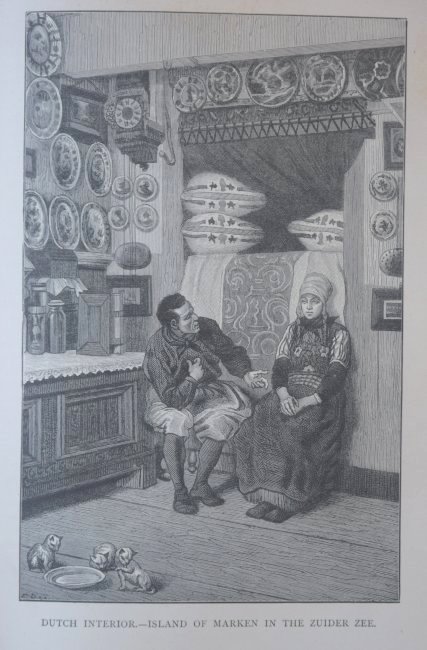