It wasn’t long after starting reading this short book that I really wanted to slap both the protagonists. It’s a love story starting with two orphan babies that are separately found on the island of Lesbos with mysterious items that imply some history or maybe a fate from the gods for them however this seems to be largely forgotten as the story progresses. The two children are raised by families a short distance apart and Daphnis ends up as a goatherd whilst Chloe is a shepherdess and they grow up looking after their flocks together and slowly fall in love. What made them so frustrating though was their total naivety regarding sex, they look after goats and sheep for goodness sake surely they have noticed something over the years?

The book was written around 200AD, presumably on Lesbos, by a writer called Longus about whom nothing at all is known. There appear to be no other works by him and he has left no trace in history other than this short novel. Nobody even knows if Longus was his name or a even a real person or just something that has become attributed to the story. Through the tale the two of them suffer various calamities from being abducted by an invading army (Chloe) to falling in a pit dug to catch wolves (Daphnis) as they slowly progress from looking at the other one naked and getting all soppy (both of them) to trying kissing (oh this takes them ages to get round to) and very slowly finding out about sex (again both as it’s that sort of book)

The main reason that I chose to read this though was to look again at translation and how styles have changed over the decades and this book is the only one where I have two different translations both printed by Penguin books but 55 years apart and where both translations are still in print. Above is the cover of the 2011 translation by Phiroze Vasunia when it was separated out as a single book in 2016 and below the original 1956 translation by Paul Turner. 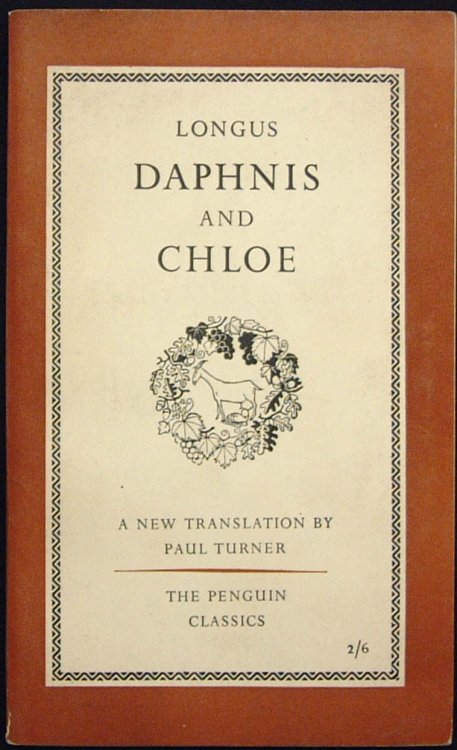 The 1968 reprint of Turner’s translation carried a notice “Former Penguin editions of this third century Greek novel, the prototype for all Arcadian love stories were we regret to say bowdlerised. Paul Turner has added the missing passages for this new edition on which the text is unexpurgated”

Now as I only have the 1956 original I cannot say what was put back in for the edition of 1968 but frankly the tale is not exactly controversial, certainly by today’s standards. In stating that I have to assume that the 2011 edition is not similarly censored but I cannot imagine that it would be. As I said at the start the story is so unrelated to sex that it defies belief for a large part of the book.

Along the way through the story they get increasing bad relationship advice, partly from men who want to have Chloe themselves and would be very happy to see Daphnis out of the way. It’s not really a give away to tell you that they do eventually get together, in the last few pages of the book and even their original parents are also revealed at this time. It is almost certainly the first example of a romance story and something that Mills and Boon would be very happy with nowadays, there are even pirates…