Way out here they got a name
For rain and wind and fire
The rain is Tess, the fire’s Joe
And they call the wind Maria

Lyrics from probably the best known song from Paint your Wagon, the 1951 musical by Alan Jay Lerner and Frederick Loewe and the song was inspired by the book that is the subject of this review. For Stewart names his storm Maria and gave rise to the whole idea of naming cyclones and hurricanes. In a later edition Stewart addresses the issue of how to pronounce Maria, originally he was thinking of Ma-Ree-Ah but changed his mind as he though she needed the harder sound of Ma-Rye-Ah so Lerner and Loewe were correct in rhyming the name with ‘fire’. Maria is very much the heroine of the book, to such an extent that the usual disclaimer at the start of a novel is in this case:-

The characters of this book – including Maria – are imaginary.

The book was first published in 1941 by Random House in the US, my copy is the Fighting Forces Penguin Special numbered S238 printed in June 1944 part of a series of books printed for American troops during WWII in a collaboration between The American Infantry Journal and the British Penguin Books. Almost all of the titles from this joint venture were factual and dealt with aspects of the war such as aircraft recognition, army handbooks, military history and exploits during the conflict. There were a total of three novels included though

An excellent selection of titles and one I will probably come back to in future articles for this site. 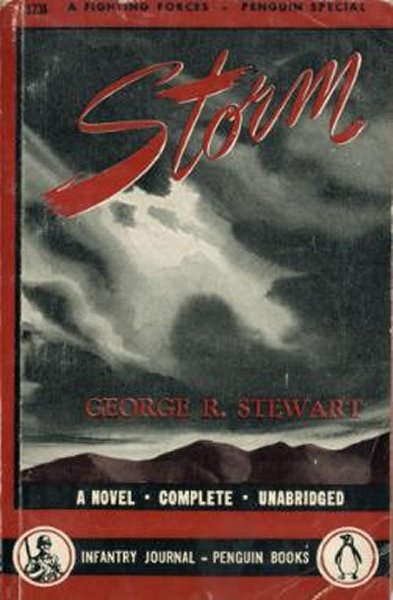 The structure of the novel is unusual, there are twelve chapters, one for each day of the storm and within the chapters there are numbered sections each of which follow a particular group of characters. These range from the meteorologists, to the telephone company repair crews, the dispatcher at air traffic control, railway workers and for myself the most interesting group which is the snow plough crews charged with keeping route 40 over the Donner Pass clear of snow.  Theirs is probably the best written story in the book and you really get to feel for their struggle to keep the road open. There are also various groups of travellers on roads, ships and trains that we keep track of and sometimes a section just deals with one incident on one day so we never hear of the characters involved again. Some of these people survive the storm, some don’t, but we follow their story in their own episodes as the book progresses, it’s like watching numerous daily soap operas before the days of binge-watching where you have to wait until the next day to find out what happens but meantime here is another story to keep track of. At the peak of the storm, through days six to nine, there are fourteen or fifteen separate stories being told in this manner for each day.

Stewart casually mentions small incidents at the beginning of the book that later become major hazards like a piece of wood falling off the back of a lorry, or somebody shooting at a junction box for a bit of fun and these later on are shown to have consequences far beyond their initial triviality. Likewise we follow Maria from a small squall off the coast of Japan across the Pacific and see her interacting with other weather systems some of which divert her route others of which strengthen and then after twelve days ultimately destroy her. During the time she gives birth to other storms and affects places right across North and Central America. One issue with the book is that in order to make sense of it you really do need a good functional knowledge of the geography of the US to follow what is going on and this may be one reason for the apparent lack of an edition in print at the moment. Fortunately I have travelled extensively across America so do know the relationship between most of the places mentioned but it could be confusing if you don’t have that knowledge. The book was a best seller in the 1940’s and 50’s so it’s a pity that it is now largely forgotten especially considering its two influences on contemprary culture beyond the books own boundaries.

As stated at the start of this blog when Stewart decided to have one of his characters (the Junior Meteorologist) name the storm this was not something that was done at the time. The JM, as he is referred to throughout the book, is somewhat ashamed of his habit of naming storms and when halfway through the story he accidentally calls the storm Maria whilst talking to his boss he is mortified. His boss however quite likes the idea and the book is cited as the main influence on the decision of the United States Weather Bureau to start naming storms using women’s names in 1953. Maria was not part of the original series of names but was added in tribute to the book and is now officially retired after Hurricane Maria killed over 3000 people in 2017.

As for its impact on music you can hear Bryn Terfel singing They Call the Wind Maria by clicking here.