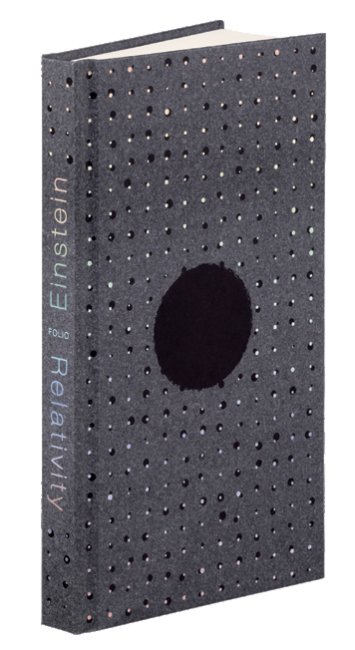 If you are going to read a book about relativity then why not go for the man who created the theories, after all as Einstein says himself in his preface…

The present book is intended, as far as possible, to give an exact insight into the theory of relativity for those readers who, from a general scientific and philosophical point of view, are interested in the theory, but are not conversant with the mathematical apparatus of theoretical physics. The work presumes a standard of education corresponding to that of a university matriculation and despite the shortness of the book, a fair amount of patience and force of will on the part of the reader.

The edition I have was published by The Folio Society in 2004 and has an introduction by Emeritus Rouse Ball Professor of Mathematics at Oxford University Roger Penrose.  Einstein originally wrote the book in 1916, just a year after he published his main paper on his General Theory of Relativity and eleven years after he had formulated his Special Theory of Relativity. Originally in German the translation is by Robert W. Lawson and he does an excellent job especially considering the complexities of the subject. Put simply the two theories deal with different things, the special theory is concerned with resolving issues between the laws of electromagnetism (specifically Maxwell’s equations) and those of motion as described in Newtonian mechanics, this becomes especially problematic as speeds approach the speed of light and time ceases to behave the way you would expect it to. The general theory on the other hand deals with gravitation and the forces between bodies caused by this. This is where the concept of warped space-time comes into place and the highly satisfying rubber sheet model which can easily demonstrate the basics of the idea and has become largely familiar to most students over the last century. It should be noted for anyone who watches the video is that the reason that the objects ultimately collide is due to friction between the balls and sheet, without that elliptical orbits would continue as we are familiar with planetary motion so this can only ever be a rough approximation of space-time curvature.

There are two ways of approaching an explanation of the theories of relativity, one book which I read several years ago does it very successfully and that is Why Does E=mc²? (And Why Should We Care?) by Professors Brian Cox and Jeff Forshaw which takes eight chapters and roughly 250 pages (depending on the edition) to cover the subject including the derivation of E=mc². Yes there is quite a lot of mathematics but there is also a large number of diagrams and descriptions in simpler terms in order to expand the readers understanding over a extended period and a short appendix in later editions to add more detail to a section that readers had queried. Einstein takes the other approach, with thirty two chapters over 132 pages (in this edition) so you approach quite complex theories and mathematics in small bite size chunks and you can reread the short chapters until you have grasped the concept being covered. There are also five appendices in a further fifty four pages which go into significantly more detail of the mathematical models and theories underpinning the two theories which are not needed by the casual reader but are there largely for completeness. In his introduction Penrose explains that part of the calculations done by Einstein in the book are no longer done that way as expressing time with a fourth dimensional axis based on imaginary numbers is seen as an unnecessary complexity when it can be done by clocks instead. This negates the need for one of the appendices which deals with Minkowski’s four dimensional space model using the square root of -1, other than as an example of Einstein’s thinking at the time.

There is no denying that some of the chapters can be difficult to get your head around the first time of reading, especially if like me you haven’t done theoretical physics at this level for over thirty five years, but it definitely worth the effort as Einstein gradually takes you through the maths. Starting with Euclidean Geometry (the first chapter which also looks at the concept of ‘truth’ for a mathematical axiom) and then pushing your understanding through relative movement of co-ordinate systems until you hit the Lorentz Transformation less than thirty pages later which gives you the basics needed to understand relativity by comparisons of motion within relative co-ordinates systems. 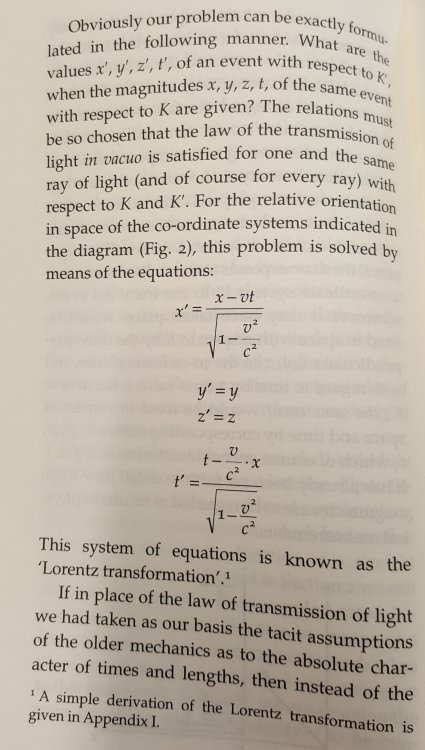 With the introduction of Gaussian co-ordinates later on we can finally approach non-Euclidean geometry, which combined with Minkowski’s four dimensional space leads to the mathematics behind the general theory and warped space-time, which for now is how we understand gravity. The book is complex, but not unreasonably so, and the short sharp sections work as a way for the reader to grasp the overall concept in practical chunks. A century on this work still underpins our understanding of the cosmos and reading this book or the one by professors Cox and Forshaw, whichever you get on best with, is a good way to exercise the brain.

Of course there is still a lot of work to go before physics hits its ultimate goal of ‘the theory of everything’. Relativity is very good at explaining the very large but when you hit the realms of the very small quantum mechanics is just plain strange to the layman and even Einstein for a long time refused to believe most of the concepts behind that branch of physics. I do have a very good book on that subject as well which I will look at later this year.

One thought on “Relativity – Albert Einstein”