This is not the book I was planning to post about this week as I am aiming to do a fuller story of the Asterix books later this year but I was doing a quick scan read to get my head round what I wanted to say and this book came up as extremely pertinent to the current world news, so I have added this short review.

Now you may wonder why a book set during the time of Julius Caesar featuring a small tribe of Gauls would be so relevant to the present day and I will get to that but first a little bit about the series. The Asterix series of books started with ‘Asterix the Gaul’ written by René Goscinny and illustrated by Albert Uderzo in 1961 and now run to 38 volumes although now no longer by the originators. Goscinny  worked with Uderzo on the first two dozen titles until he died in 1977. Uderzo then wrote and illustrated a further ten books until 2009. In 2013 the first book written by Jean-Yves Ferri and illustrated by Didier Conrad appeared and this team have so far produced four titles of which this is their third (overall book 37) and was published in 2017. All comments below relate to the English translation of the text which was done by Adriana Hunter, this was her first time translating Asterix and overall I think she does a good job having taken over from Derek Hockridge and Anthea Bell, who between them translated the first 36 books. 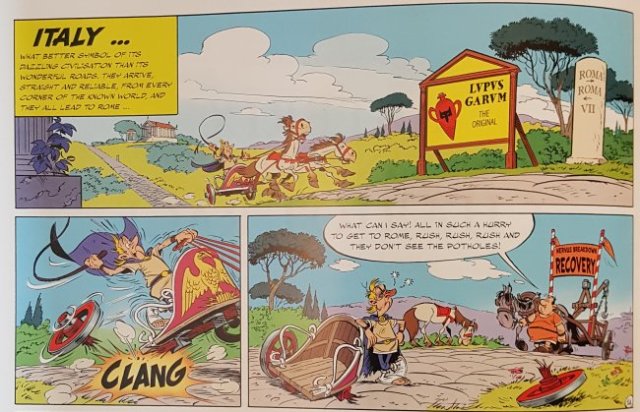 The story starts with complaints about the state of the roads with potholes everywhere throughout the network in Italy. Consul Lactus Bifidus is challenged in the Roman Senate to do something about it as he is in charge of the roads but instead announces a chariot race to prove how good the roads are. The race is to be open to all comers and will start in the north of the country in what is now Lombardy and speed down to the south with a cup for the winner. Asterix and Obelix decide to enter even though neither of them are charioteers mainly because as the chief of their village, in the English translation he is Vitalstatistix, says

A lot of the names are changed in the English translations but I need to point out at this juncture that the significant one from this book is the same in the original French edition ‘Astérix et la Transitalique’. The route of the race can be seen on the flyer shown below. 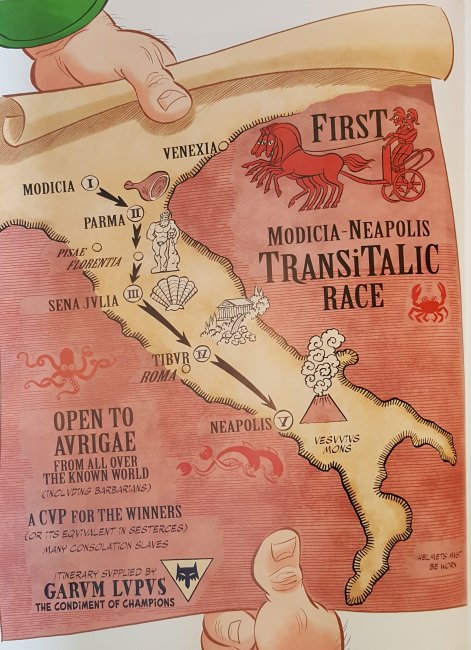 Lactus Bifidus is visited at home by the Emperor Julius Caesar and it is made quite clear to him that a Roman has to win or he will be personally fixing the roads in Libya which can definitely be seen as an incentive so he finds a great champion. Now this is where the book becomes a bit weird for those of us reading it in March 2020 as the name of the great charioteer is revealed and he is subsequently cheered on in very large text through the rest of the book.

Yes you read that right, the person racing down Italy starting in Lombardy, for the honour of the Roman people, in a book published in 2017 is Coronavirus.  To prove that this is the original name and not one which Adriana Hunter came up with below is the original French panel. 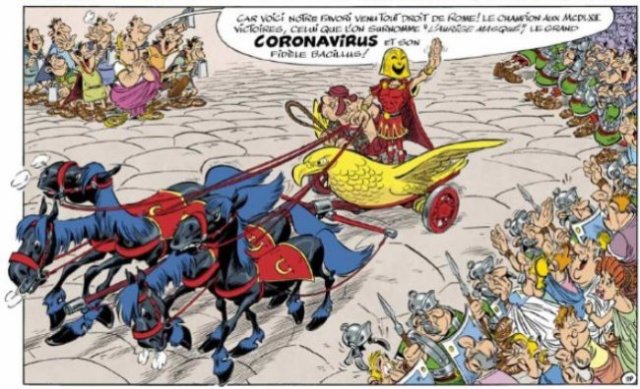 Stay safe everyone and let’s hope that things improve soon.