This week I’ve been reading one of the classic dystopian novels; and a very early book to take the theme of climate change as it was written in 1962. The edition I have was printed by the Folio Society  in 2013, bound in full buckram and beautifully illustrated by James Boswell who also created the design blocked onto the cover in reflective metallic copper and gold ink. The copper coloured endpapers continue the bright design so appropriate for a book about the burning sun beating down on a flooded planet.

J G Ballard is best known for his apocalyptic stories where the world is viewed after a catastrophe, “The Drowned World” is his second novel and is preceded by “The Wind From Nowhere” where extreme winds are destroying the Earth and followed by “The Burning World” where pollution in the oceans eventually gets to such a level that it blocks the precipitation cycle leading to no more rain and deserts everywhere. “The Drowned World” is a novel about the aftermath of runaway global warming, the ice caps have melted flooding most of the rest of the world, and humanity has largely retreated to the Arctic zones. Dr Robert Kerans and his older colleague Dr Alan Bodkin are biologists attached to a military expedition tasked with exploring the drowned cities however it has become clear over time that the charts they have produced are going to be no use as the heat is just increasing so mankind will never recolonise the majority of the planet. The temperature in flooded London is well over 40 degrees centigrade by mid morning and the afternoon heat is unbearable. Kerans and Bodkin hatch a plan to stay behind when the expedition is due to leave; along with the enigmatic Beatrice Dahl who is still living in the penthouse that belonged to her parents. 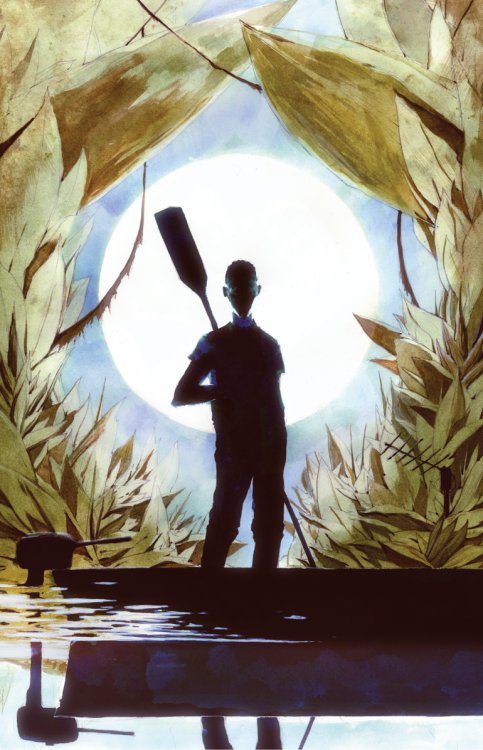 They are all having strange dreams about the sun and a desire to head south into the increasing heat without clearly understanding why this urgent need has overtaken them. The other members of the unit are also having the same dreams and this is one of the factors that leads the commander to decide to leave sooner than originally planned.

The London that the three characters are left in when they do elude the journey north is rapidly regressing to a revitalised Triassic period with giant iguanas, huge bats and insects recolonising the swamps and flooded lagoons of what was once the squares and thoroughfares of the city. Kerans has taken to living in the top floor suite of what was once The Ritz, Bodkin scuttled the science station over the top of The Planetarium, presumably the one in Greenwich, whilst Beatrice remains in her suite and here they are planning on lasting as long as they can until the fuel and food finally runs out after when they will abandon London and head south as their dreams are calling them.

The writing style is sparse almost lethargic and matches the slowness of the characters as the heat forces the them to do less and less and just reduce their lives to sleep and short expeditions to occasionally visit each other. The washed out illustrations by James Boswell also match this sense of oppressive heat as the reader gets drawn into this world. Mankind is losing, the planet is returning to a more primitive state and it is implied that so is man.

Of course it is all going to go wrong and halfway through the book it does and a heightened level of horror is injected into the book which carries us to the inevitable denouement as the characters mental states slowly collapse. It’s a brilliant book, Ballard wasn’t really appreciated in his own lifetime although since his death in 2009 his works are becoming more and more respected but as he himself said

For a writer, death is always a career move

One thought on “The Drowned World – J G Ballard”