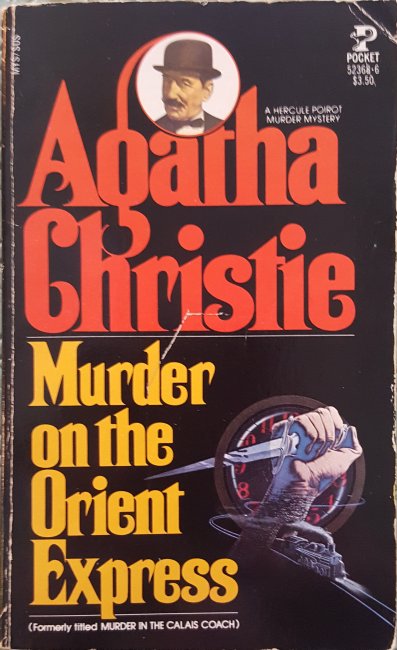 This is not a traditional review of Christie’s most famous book hence it’s inclusion in the ‘Book Tales’ category on the blog. How could I say anything about the story that has not already been said? Sharp eyed readers will have noticed that despite me being English my copy of the book featured above is an American Pocket Book edition and there is a very good reason  for that which gives a personal link to the story. Thirty three years ago I travelled on the Orient Express with my then girlfriend, who was American, and she brought a copy of this book for me which we both read whilst on the train.  Another thing you may notice is right at the bottom ‘Formally titled MURDER IN THE CALAIS COACH’ this is a reference to the habit Christie’s American publishers Dodd, Mead & Co. had of altering the titles of her books which does make any bibliography quite messy. Other examples (Original English title first) include:-

Rereading the novel again, probably for the first time in three decades, I was struck by how well it was written. Even though I of course knew the solution, as does almost everyone with an interest in detective novels, it didn’t matter, I still enjoyed how Christie developed the story and Poirot’s slow realisation of just what a fantastic solution it is. It is also a ‘locked room mystery’ in that the train is stuck in a snowdrift on its way from Istanbul to Paris so the murderer could not have escaped from the train and it is also impossible for Poirot to verify any clues he may discover or even who anybody is with the outside world as they are completely cut off. The train gets stuck just after Vinkovci (spelt Vincovci in the book) which is now in Croatia so on the southern route on the map below just as the line turns north to head to Budapest. 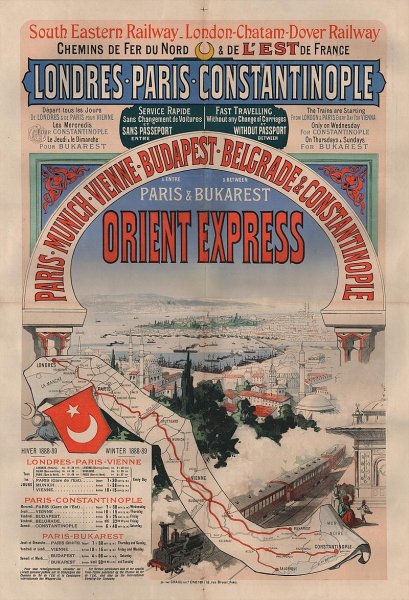 This poster is from the winter season of 1888/9, forty years before the book is set but gives a hint of the glamour associated with the journey. It’s a trip Christie made several times whilst visiting her husband on his archaeological digs in Iraq so she knew the operation well and the story of the Armstrong family with the kidnapping of the baby daughter and the subsequent deaths which is the background to this book is a straight borrowing from the Lindbergh case which had happened a couple of years earlier. Everyone reading this book when it first came out would have been familiar with the Lindbergh story which had been a worldwide sensation in 1932, to my mind it was somewhat tactless of Christie to so obviously take this tragic case and turn it into a murder mystery of her own, there are too many similarities to be comfortable if you know about the original.

I also included the poster in this blog as it was this, rather than Christie’s novel, which inspired a trip on what was left of the Orient Express back in the late 1980’s. By then, although it still left Paris at 9am each day it only made it to Bucharest and by the time it got there it was hardly an express and the glamour was long gone on the entire journey. By adding on extra trains from Bucharest to Belgrade and then on via Sofia to Istanbul I did manage to stay at least one night in all the cities listed in the poster heading. It was natural that we would read Murder On The Orient Express whilst travelling on it. Nowadays there is only the luxury private train that carries that name and recreates the glamour that Agatha Christie would have known in the 1920’s and 30’s when she was a passenger and which she used as the setting for, if not her best then certainly her best known work.

A somewhat scary flashback photo below, reading this very book whilst travelling between Paris and Munich on the first stage of our Orient Express journey back in 1987. 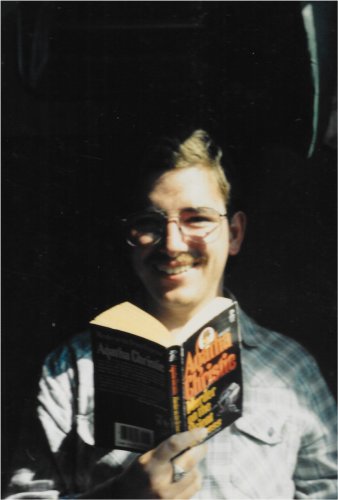 One thought on “Murder on the Orient Express – Agatha Christie”